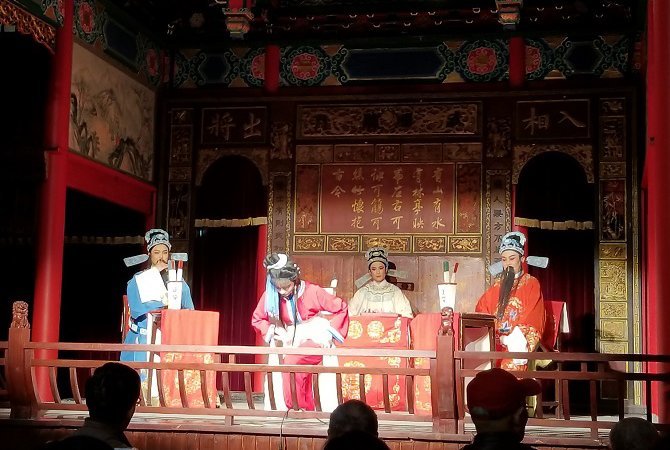 One of the ancient capitals of China, Nanjing literally means “southern capital.” While not as metropolitan as Shanghai (accessible in 90 minutes via the high-speed trains) and not as beautiful as its neighbors, the proclaimed “heavens on earth” cities of Suzhou and Hangzhou, Nanjing is a city filled with landmarks and artifacts that showcase China’s history and culture from the ancient to the modern. Here are my recommendations for things to do and eat in 1 day in Nanjing, plus other suggestions if you’re staying longer.

These dumplings have the doughy outsides similar to the sheng jian baos of Shanghai, but on the inside they’re more like the regular potstickers. They’re fried in gigantic pans and have a crunchy outside with juicy beef filling on the inside. 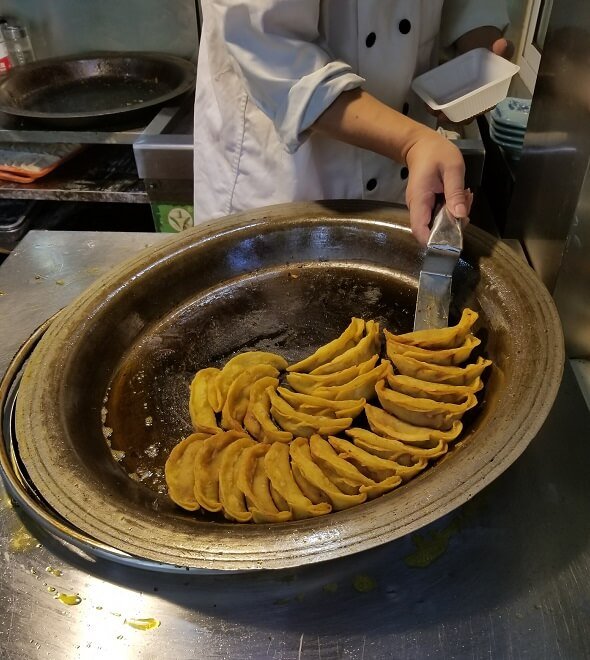 Head to the Nanjing Massacre & Victory of Anti-Japanese War memorials

Admission is free and the line moves pretty quickly, but take your time as needed once you’re inside. It can be a lot to take in, and you should prepare yourself emotionally and psychologically. You should be extra prepared for the graphic violence and rape that is depicted in photographs, videos, and written testimonies as they can be quite triggering. 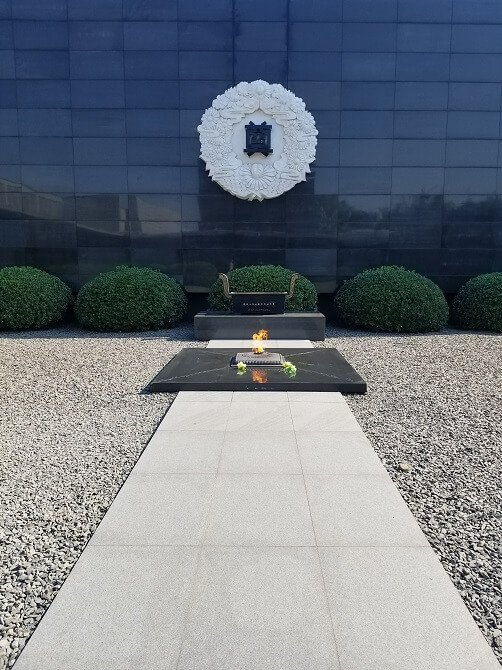 On your way out, after the peace pond, take a right and follow the path to the Victory of Anti-Japanese War Memorial to get some additional context on what happened in the 30s and 40s in China during the decades of Japanese aggression. 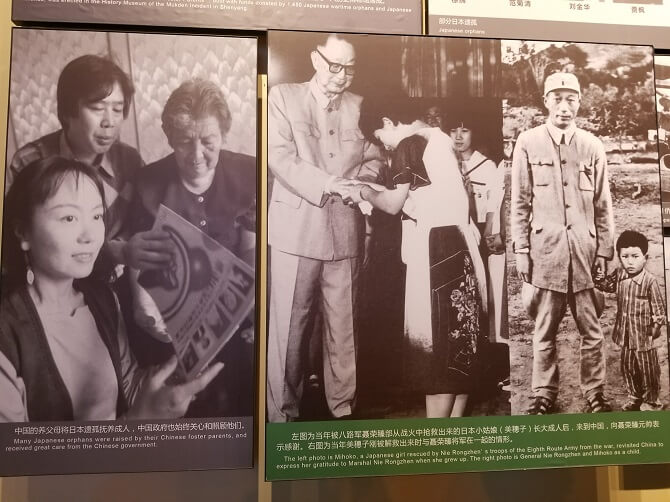 Enjoy a slow lunch of other Nanjing specialties

By this point, you may be pretty emotionally drained, so take some time and enjoy a slow lunch. There are plenty of vendors selling a variety of street food outside the memorial halls, or you can go to a restaurant for Nanjing specialties such as the sweet or savory sesame pancakes and the famous pidu noodles.

Pidu noodles are a must-eat, everyone said, so I made sure to get a ¥28 bowl at the famous Yiji Pidu Noodles shop on Mingwalang, a popular Nanjing food street. What is pidu, you ask? It’s actually pig skin that’s boiled and then deep fried. That’s then put into a giant bowl with tons of noodles and a dozen or so other ingredients. I was not a fan of the flavor of the pidu nor the broth and only ate enough to feel somewhat full before I went on my way. If you do like it, however, the massive bowl will take you a good amount of time to consume.

President and palace are two words that don’t commonly go together in Chinese history. There have long been palaces for kings and emperors, and the first president of China came along with the establishment of the Republic of China in 1912, but there’s really only been one presidential palace.

In a lot of ways, the Presidential Palace is geared toward visitors who can read Chinese more than others, as there are few descriptions in any other language. However, because of the architectural diversity and storied history of the place, I’d say it’s worth taking an hour or two and ¥40 to visit. You’ll want the audio guide though if you don’t know Chinese, as context is everything with this place.

For those looking for the tl;dr, this palace was initially used as a royal residence during the Ming Dynasty and then as a government building during the Qing Dynasty. It was taken over during the Taiping Rebellion and housed the throne of the Taiping Heavenly Kingdom (whose leader proclaimed himself a brother of Jesus Christ). Upon the establishment of the Republic of China, the palace became the country’s presidential quarters on and off until Chiang Kai-shek and the Kuomintang fled to Taiwan in 1949. The palace reverted to being a provincial government building until the late 1980s, when it officially became the China Modern History Museum. Most Chinese people still call it the Presidential Palace, however.

There are classic Chinese architectural elements blended with the western influences of the Republican era. And there are the modest buildings and gardens of the bulk of the complex contrasting with the extravagance of the Taiping Heavenly Kingdom’s buildings.

Continue your day at the Nanjing Museum, one of China’s largest. Tickets are free but visitors must go to the Service Center to pick up a ticket unless they are Chinese citizens with second-generation ID cards, in which case they can use the kiosks around the museum campus to claim a ticket.

This huge museum could take you multiple days to fully explore, but plan your visit around the daily Chinese opera performance from 2-4 p.m. The setting is a traditional Chinese opera tea house (even the servers are dressed in traditional garb!), and you can order tea and snacks and grab open seats whenever you arrive. Tea is ¥10 per person with free refills, and snacks are ¥12 for a large bowl of Chinese chex mix, crackers, nuts, and such. You can also enjoy the performance for free by standing in the back if you’re not interested in tea and snacks. 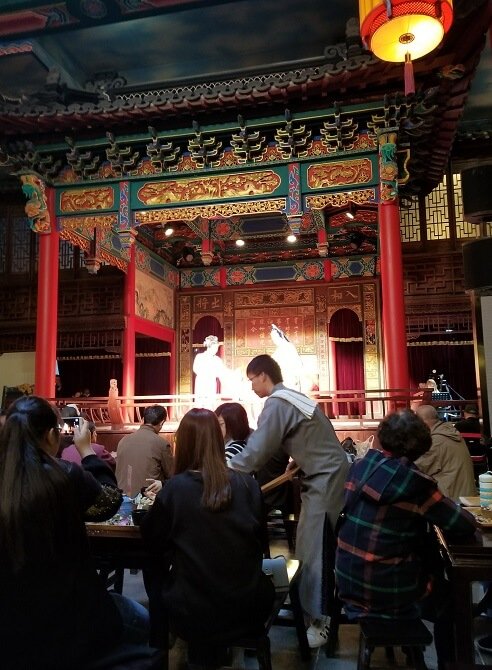 There’s a different opera each week featuring different types of Chinese opera. The experience can be fascinating even if you have no idea what’s going on, as captions are only in Chinese. When I went, it was a Yue opera, and while I’d only expected to stay as long as it took me to finish my tea and snacks, I ended up being enthralled by both the performance and the people-watching and stayed for the entire performance. 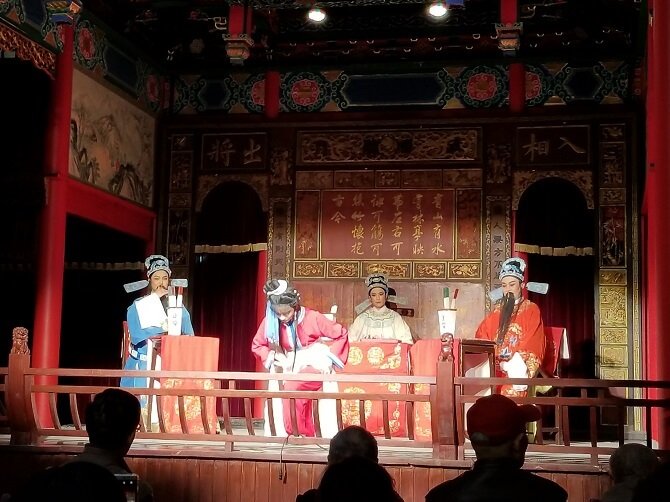 When the show is finished or whenever your attention wanders, head out to explore the 400,000+ items in the museum’s permanent collections as well as whatever is on special exhibit. The exhibits cover everything from prehistoric fossils and ancient pottery to imperial jade and ceramics to southern Chinese silkworks and folk art. (While the Nanjing Man (homo erectus nankinensis) was so named because it was found in the area, it is not at this museum.)

Pig out at Shizhiqiao Pedestrian Street

While not the most impressive of street food spots in Asia, Shizhiqiao Pedestrian Street does have a variety of options to satisfy your hungry curiosities. I found that the best dishes were in the restaurants that lined the street, as there were few true street food vendors. Duck into one of these to try one of Nanjing’s specialties: duck! 😉

Nanjing salted duck is famous in China and is a delicious way to eat duck that you likely haven’t experienced before, in large part because it’s served cold. It is salty though, so make sure you also order something else to balance it out. If you’re adventurous enough for some duck blood soup, that’s also a local specialty. If not, chicken soup with shredded tofu is another local option, as are Nanjing’s translucent bite-size wontons.

If you have more than 1 day in Nanjing, head out to Purple Mountain to appreciate the city’s natural beauty. While there, visit the Sun Yat-sen Mausoleum to pay respects to modern China’s founding father and the Ming Xiaoling Mausoleum to see where the Ming Dynasty founding emperor rests.

If you’re more of an indoors person, head to the ruins of the Ming Palace (also known as the Nanjing Forbidden City) and the adjacent Nanjing Ming Palace Museum Relics Park to view what it was like when Nanjing was the country’s capital during the Ming Dynasty.

For a spot that’s both cultural, historical, and entertaining, hit up the Nanjing Fuzimiao (Confucius Temple) area. While the current temple is a relatively new structure built in recent decades, the temple and the area around it are all built in Ming and Qing architectural styles. The area also has numerous restaurants, cafes, and shops, making it a favorite for night-time exploration. 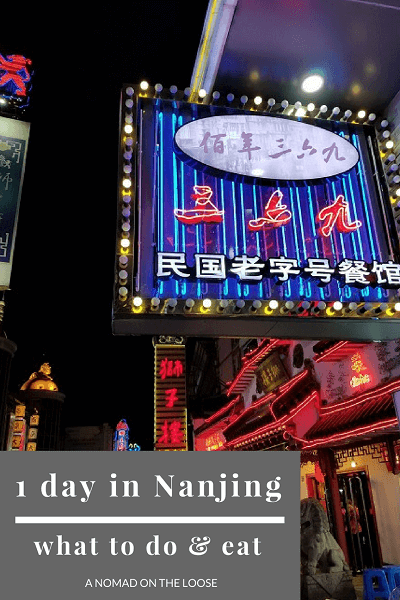