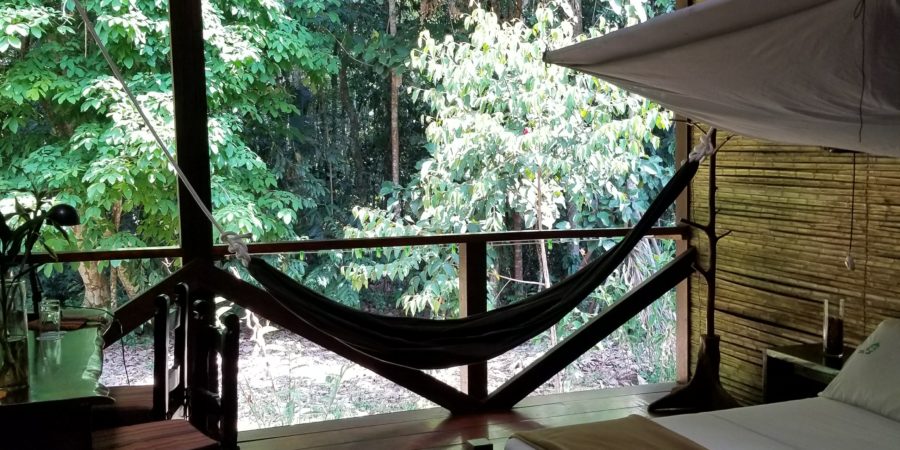 I’m all for DIY travel and generally abhor tours except for when necessary, such as with the Inca Trail. As we planned the rest of our Peruvian adventure and looked to the Amazon, however, we realized that it would be much easier to find a lodge that could provide airport-to-lodge service than to try to put together something ourselves.

While we love the outdoors, jungles aren’t exactly in our realm of expertise. But first, an important question:

Amazon Rainforest: which area to visit?

When thinking about the Peruvian Amazon, there are typically two broad categories: the rainforest/jungle and the river itself. The only place to actually cruise on the Amazon River is Iquitos in northeastern Peru; it’s also where you can visit with and experience the lives of the indigenous peoples of the Amazon. The other two Peruvian Amazon jungle areas are in Manu and Tambopata, both rich in biodiversity. While I would have loved to visit with and learn about the indigenous peoples of the Amazon, we chose to go to Tambopata given its closer proximity to Cusco, where we would be after coming off the Inca Trail.

After spending a good amount of time comparing various options, we chose to go with Refugio Amazonas, part of the Rainforest Expeditions family.

Situated roughly a 70-minute drive and then a 3-hour boat ride from the Puerto Maldonado airport, Refugio Amazonas is indeed a luxurious refuge in the jungle. It’s far enough into the jungle to offer ample wildlife sightings but not so far that you have to spend two full days just to get to and from the lodge.

Lodging: The rooms at Refugio Amazonas were gorgeous. The Superior rooms included two double beds with mosquito nets and a hammock in a simple three-sided wood room. Your fourth wall is the jungle itself. You have your own bathroom, including a hot shower and eco-friendly toiletries. There’s ample electricity and Wi-Fi around meal times as well.

Activities: The highlight of Refugio Amazonas and the main reason we chose it is its large variety of wildlife sighting opportunities and outdoors activities. From watching hundreds of macaws, parrots, parakeets, and parrotlets feed and fly overhead to climbing up to the top of the canopy, the days are packed. If you book your visit A La Carte, you’ll have your choice of activities. If you don’t, you’ll be placed into a group on a set itinerary. I think you can guess what we picked.

In the span of our time there (4 days, 3 nights, which amounts to two full days in the jungle), we kayaked down the Tambopata River, climbed up multiple canopies, mountain biked through the jungle, went to both the mammal and macaw clay licks, rowed on Oxbow Lake, and went on numerous day and nighttime walks through the jungle and spotted a variety of wildlife and previously unfamiliar flora.

The lodge also has a citizen scientist program whereby guests can help the resident biologists and botanists with their research. For example, we helped collect moth samples and set up motion-sensor cameras to capture footage of jungle residents. In the case of the latter, Refugio Amazonas staff sends you the footage after your departure. [Update: We were told ours would be left up for 2-3 months, but we ended up getting just this one photo about a month after.]

Food: This was the disappointment of Refugio Amazonas. Given the chefs on the Inca Trail were able to produce such amazing meals off of two portable burners, it was sad to see such bland food being produced at such a nice lodge. You get three meals a day included, but there’s no creativity or passion in the food.

Price: At $303 per person per night, Refugio Amazonas was busting the seams of my budget. (For comparison, I spent ~$800 for two weeks in Portugal and Spain, not including flights.) While there are certainly more expensive lodges in the area, there are plenty of more affordable options as well. (If you’ll already be in South America, you should be able to find many more affordable lodges than trying to book online while in the U.S.)

Overall, Refugio Amazonas is a solid choice if you’re looking for a comfortable and dynamic Amazon experience without completely breaking the bank.