The southwestern Chinese province of Guizhou captured my attention as soon as I learned that it was one of the most ethnically diverse provinces in China but wasn’t as commercialized as the ever-popular Yunnan province. So after exploring the gorgeous natural wonders of Guangxi, we hopped on a train from Guilin to the city of Congjiang. From there, a short taxi ride took us to the Basha Miao village. I had actually really wanted to avoid going to the Basha Miao village, considering it over-commercialized. But due to train schedules and because the Basha Miao are touted as the last gun-toting tribe in China, I decided to make the visit.

Who are the Basha Miao?

The Basha Miao is sometimes also called the Biasha Miao. The variation in spelling is due to the fact that there’s no Chinese word that sounds the same as the first constant of their name in their own language. “Ba” is the romanization of the closest-sounding Chinese word, while “Bia” is the closest Chinese phonetics can get, even though there are no Chinese words with that sound.

A subset of the Miao ethnic minority, the Basha Miao are said to have been fierce warriors and hunters who settled in the Congjiang region back when it was densely populated forest full of bears and other wild predators. And so despite strict gun control laws in the rest of the country, the Chinese government has allowed this tribe to keep their guns.

Life in the Basha Miao Village

Today the village is gated like a theme park, and admission comes at ¥80, which includes the thrice daily cultural shows. (They’re at 9:30 a.m., 11:30 a.m., and 3:30 p.m. as of October 2017.) Here I felt the irritation I have learned to expect when visiting more commercialized ethnic minority groups. Everyone crowded around to snap photos as the villagers performed a series of acts, from reenacting a traditional wedding ceremony to a live head shaving with a sickle. Elements crucial to the Basha Miao culture that are not as stage-worthy, such as tree worship, were skipped over in this show.

The performance ended with a song and a dance that showcased the famous guns of the tribe. Many of the men then stayed behind with their guns to pose for photos with visitors.

Here the awkwardness was just waiting to happen, as many of the men waited until photos had already been taken to tell visitors that they have to pay for the photo. This inevitably led to some frustrated visitors, a few flustered ones, and some brief arguments. Do the villagers have a right to their monetary demands? Are the tourists over-stepping when they refuse to pay? This was one of the many moments in Guizhou when I pondered whether cultural tourism helps or hurts those we visit.

Many visitors come for the show and then leave soon after. For me, the show felt too commercialized a production, and it was much more interesting to walk around the village and speak with the locals. (Most spoke some amount of Mandarin Chinese, though some only spoke Miao.) These days there are a little more than 500 families in the village, totaling just under 2,500 people. Some villagers have permanent roles in the tourism business, such as being security guards, while others rotate through the performance circuit. Village life must go on, of course, so traditional activities such as farming, basket weaving, and embroidery continue as before.

We were preparing to leave the Basha Miao village when we encountered what was perhaps the most educational aspect of the visit: a tiny museum that opened in early October 2017, just days before our visit. So small and lacking in signs that it’s easy to miss, the museum is an absolute highlight. It covers the beliefs and traditions of the Basha Miao from birth to courtship to death, customs that have mostly faded away these days. If you’ve already made it into the rural hills of southwestern China and into the Basha Miao village, make sure to stop in — with a friend who reads Chinese. It’ll be well worth your time. 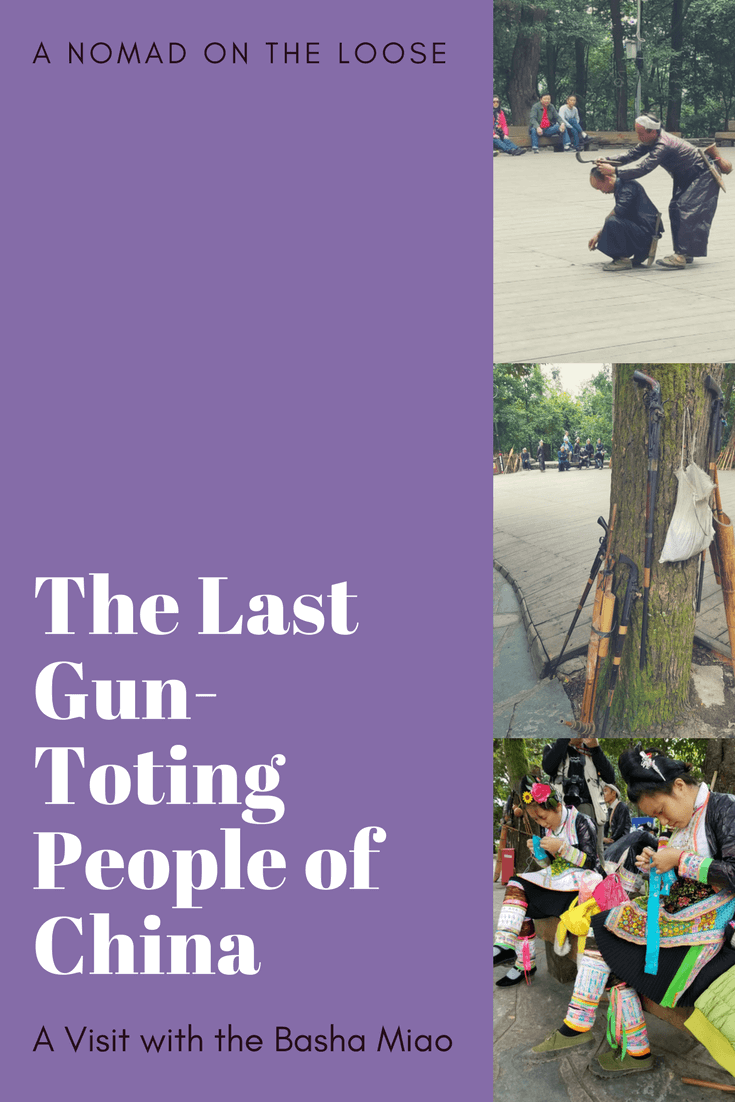 5 thoughts on “The Last Gun-Toting People of China”