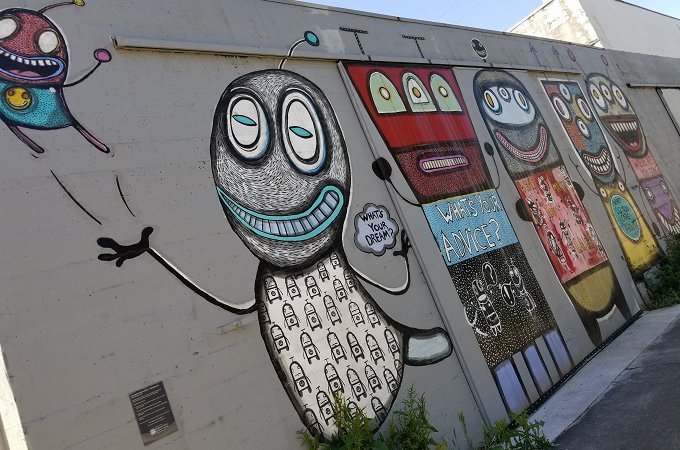 One of my favorite things to do in cities around the world is to wander around and find cool street art. When I visited Portland in June to visit a friend, I knew I wanted to explore the city’s massive art scene. I navigated, wandered, and mapped out some of the city’s best street artworks for you. So hop on a Biketown bike and get going on your Portland street art crawl. Or, tie your shoelaces and make it an urban hike.

Where possible, I’ve tried to identify the names of the artist and the piece, as well as its exact location. Each photo is tagged with a number, and a map of all this wonderful Portland street art is at the end! 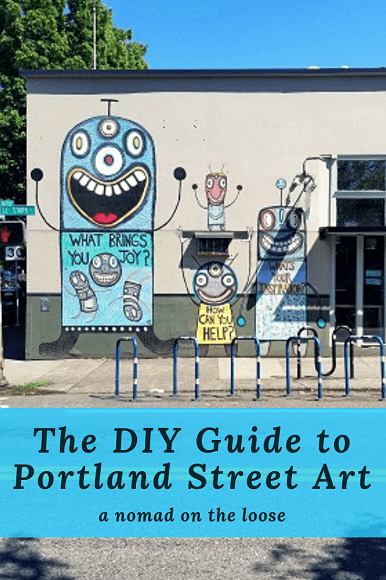 Start in downtown Portland near the famous and independent Powell’s City of Books. At SW Washington St. between SW 11th and SW 12th Ave., you’ll find our first stop: “Capax Infiniti (Holding the Infinite)” by Faith47.
Around the block, another woman rises high on the walls. She, unlike her compatriot, faces us.
Ride through downtown, and at NW 4th Ave. and Everett, you’ll find “Black Pepper,” a collaboration between Caratoes and Smithe.
For your last downtown stop before crossing over to the other side of Portland, leave behind these artistic renditions and stop by the iconic, if less artistic, Keep Portland Weird sign.
Then head down the main stretch of W. Burnside and cross the Burnside Bridge. I know this isn’t street art, but don’t forget to stop for a sec and turn your head around for the Portland, Oregon sign.

As you cross to the other side of the city, you’ll continue to see artistic touches everywhere. Even office buildings are wrapped in delicious murals. This one has been named “The Fair Haired Dumbbell.” It was designed by James Jean and is located at 11 Northeast Martin Luther King Jr. Blvd.
Take a slight detour and swing over to NE 8th Ave. at the corner of NE Couch St., where you’ll find two untitled pieces side by side. The deer is by Camille Rose Garcia, the girl by Peach Momoko.
Next, the first of the many #botjoy murals in Portland. The one on the left is the Questions for Humans: Dreams Wall located on SE Salmon St. near the intersection at SE 10th Ave. The one on the right is the Joy Wall at 1205 SE Stark Ave.

This art crawl doesn’t go there, but FYI on the location of the other two parts of this series. The Relationship Wall and the Curiosity Wall, are at 3050 SE Division St. and at the intersection of SE 11th Ave. and SE Ash St., respectively.

Continue west on SE Stark St to the most prolific blocks for Portland street art. Within the four corners between SE Oak St. and SE Stark St. to the north and south and SE 10th Ave. and SE 11th Ave. to the west and east are all of these pieces and more.
Next, go south. Near the intersection of SE 14th St. and SE Morrison are an untitled piece by Laura Berger that I’ve dubbed “Curvy Bodies” and “Cycles of X” by Shawna X.
Around the corner from them is perhaps one of the few Portland murals I knew of before visiting the city. This rhino is by Portland local Josh Keyes.
Head south once more toward Oregon Brass Works for some additional animal-inspired street art. Around 10th and Taylor, you’ll find these gorgeous murals facing either other.
Then go west toward the Lucky Labrador Brewery on SE Hawthorne Blvd. Right across the street is the Hawthorne Arrows by Blaine Fontana.
Hold tight, we’re almost done. Ride north back toward SE Stark St. and SE Martin Luther King Jr Blvd., where this mural awaits you. Last but not least, down SE Stark just before you hit SE 2nd Ave. are these Hellenistic vases.

That was just a sampling of Portland’s fantastic selection of street art. I focused on downtown because most people are likely to visit downtown Portland at some point. And I chose southeast Portland since that area has the highest concentration of street art in the city.Here’s a sprinkling of art from elsewhere in the city. Make sure to ride around and find some others as well!
And here’s the promised map of all the places in this Portland street art crawl. Keep in mind that the locations are estimates in some cases.