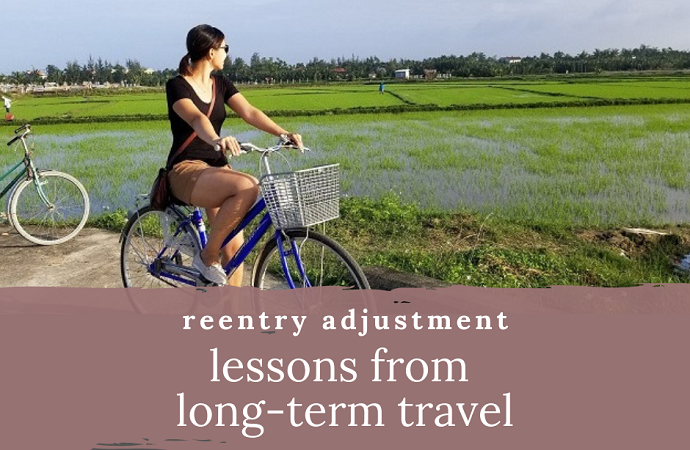 It has officially been more than a year since I returned to the U.S. after a period of long-term travel. People have often asked what it’s been like to go back to a normal life with a job, but I felt it was wise to let time pass before really reflecting on my reentry adjustment.

These reflections can apply to all sorts of long-term adventurers, but they’ll be especially poignant for solo long-term travelers.

Maybe you want to know what it’s like because you’re considering taking some time off for long-term travel, or maybe you’re simply curious. Either way, I hope these learnings will be helpful for you.

Before I left to travel, I felt like I had a really good grasp of time. I don’t mean like “Oh, it’s 8:20!” or that it’s Thursday, but that days and weeks felt clear and defined to me.

In the year since I’ve been back from my solo long-term trip, however, I’ve felt like time continuously slips through my fingers.

When I was traveling, I’d book a train ticket and one night’s stay at some hostel and be on my way, making decisions about my next steps as I went. I’d stay in places like Chiang Mai for weeks because I felt like it — or sometimes stay in places I didn’t care for because the weather made it so.

Point is, I didn’t have the construct of weekends or the rigidity of schedules.

These days I’m back to a “normal” schedule of working 5 days a week, but the days and weeks still go by in what seems like a neverending blur.

2. Headphones can become a problem

I admit, I still struggle with this.

For reasons varying from introversion to avoiding irritating men to simply wanting to catch up on podcasts, I have my headphones in a lot. Like, a lot a lot.

That’s me in my normal day-to-day, and it got even more intense during my travels.

When I got back stateside and eventually started a full-time job again, it took so much proactive effort to take out my headphones and speak to people.

Like I said, still working on this. But if you’re similarly inclined and want an easier reentry adjustment, lose your headphones in your bag for a while.

3. You may have to relearn relationships

One of my biggest learnings from my travels was learning how to make fleeting friends. That is, the folks whose paths cross yours — sometimes for a few hours, sometimes for a day or two, and once in a while, for a much longer time.

The flip side of that, however, is that you start to engage less in building long-term relationships. And that, of course, is crucial in life.

If you’re cognizant of the potential for this occur and actively work to prevent it, though, you should be a-OK. (Step 1: see #2 regarding headphones.)

4. It’s okay if no one understands

In some ways, reentry adjustment after long-term travel is similar to the feeling you get any time you live somewhere a little different than what you’re used to. A reverse culture shock, if you will, like what I felt upon moving back to the States after living in France.

But there’s also something different about reentry adjustment after long-term travel, especially long-term solo travel. And this nuance is probably the most important thing to keep in mind.

Because when you return, you’ll want to share the joys and thrills of your travels with your loved ones. And when the shine and excitement of your adventures fade, you’ll also want to share your restlessness and melancholy.

But to be able to travel for long periods of time is still very much a rarity and a privilege, so it’s most likely that you won’t be surrounded by those who’ve had similar experiences. Which means that try as they may, your family and friends may not truly understand the full spectrum of your emotions around your trip and your life after returning.

Share with them what you can, but don’t let yourself feel down because you feel like no one 100% understands.

That’s all I’ve got for you this week. I’d love to hear of your reentry adjustment stories in the comments!

Share it to help others prepare for reentry adjustment! 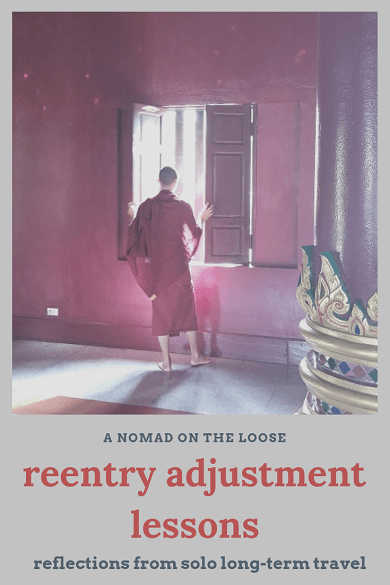