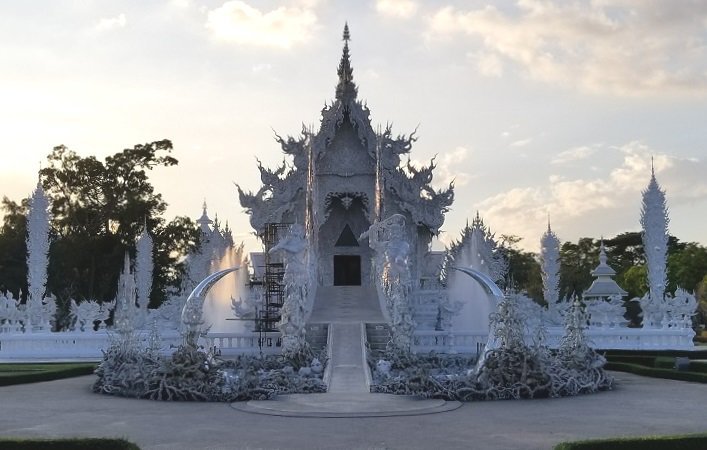 Thailand is the land of temples, and perhaps one of the most famous and unconventional is Wat Rong Khun, better known as the White Temple. It is certainly a gem of the northern Thai city of Chiang Rai, likely the attraction that brings in the most visitors each year. Those in the know also come for another colorfully named structure: Baan Dam, or Black House. Together, these two unconventional and thought-provoking complexes have often labeled the heaven and hell of Chiang Rai. And it is absolutely worth making the trip up to this city near the Laos border, if only to see these two fantastical creations. Let me introduce you to the White Temple and Black House of Chiang Rai.

The White Temple of Chiang Rai

Gleaming in a silvery white with details so intricate that it makes you wonder about the patience the artist must have, the White Temple is truly stunning in person even if you’ve seen dozens of photos of it before. 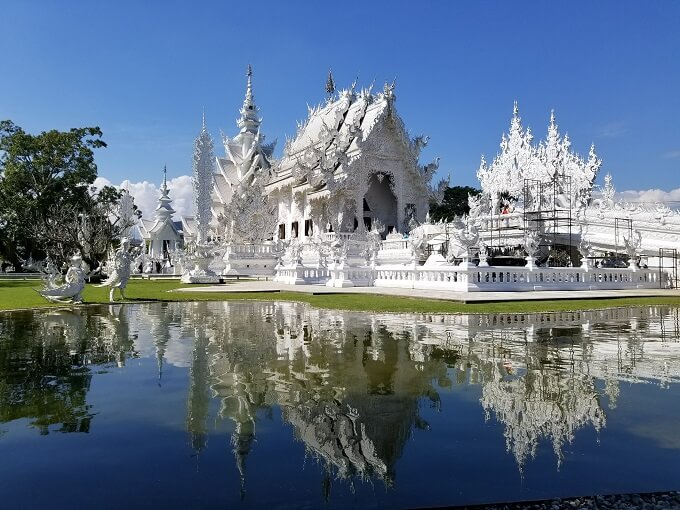 The original Wat Rong Khun wasn’t anything like what you see today; it had become dilapidated by the end of the 20th century. This new one was rebuilt by the Thai artist Chalermchai Kositpipat, a work full of symbolism around the sins and temptations one has to avoid in order to enter heaven.

Surprisingly, there were structures in gold as well in the complex, something I had not expected given the name of the place and the photos I’d seen online. But the most surprising element of the White Temple was definitely the murals on the inside walls of the ubosot, the main building of the complex. Unlike the pristine whiteness of the outside, the inside is a smorgasbord of colors. And unlike the mostly traditional Thai elements of the exterior architecture, the inside is full of Western pop culture references, from Harry Potter to Michael Jackson. No photos are allowed inside, so the shock is even more profound.

Admission to the White Temple is 50 baht for foreigners. The adjoining gallery of Kositpipat’s work is free to enter. And while it is not a working religious temple, you are required to dress modestly and cover your shoulders and legs just as if you’re visiting a regular temple. Its hours are 8 a.m. to 5 p.m. Monday-Friday; on the weekends it closes at 5:30 p.m. The temple does have an hourlong lunch break starting at noon each day.

The White Temple is approximately 15 kilometers from the city center, and you can get there via a variety of transportation options. You can call a Grab (Uber of Southeast Asia), rent a scooter and drive yourself, hire a private car and driver, or take one of the public transit options.

The first option is the songthaew, or the converted pickup trucks used as shared taxis in Thailand.  The songthaews cost 150 baht to go to the White Temple and leave when full or when those in the songthaew decide to pay the full amount. That is, if there are 5 people in the songthaew, it’s 30 baht per person. If there are only 2 people but you don’t feel like waiting anymore, you can choose to each pay 75 baht and get on your way. The cheapest option is the local bus. Simply go to the bus station and take one of the blue buses that go to Mae Suay or Mae Kajarn. Typically the fare collector will also hold up a sign that says Wat Rong Khun to help direct tourists. Tell them you’re going there and they’ll drop you on the side of the road kitty-corner to the temple. Fare is 20 baht.

The Black House of Chiang Rai

A roughly 35-minute drive away on the flipside of Chiang Rai is the Black House, formally known as the Baan Dam Museum. Artist Thawan Duchanee built this sensational place, full of buildings, installations, and paintings, all predominately in black.

Animal bones and skins also fill the place and may be less suitable for those sensitive about those things, though I felt they were used in ways that were thoughtful and artistic and not simply macabre for the sake of being shocking. Images of the artist himself at various ages also pop up in various places.

Admission to the Black House is 80 baht and also includes a gallery of Duchanee’s other works. The place is open from 9 a.m. to 5 p.m., and there is no dress code.

The Black House is approximately 10 kilometers outside of Chiang Rai city center. It is a bit tucked away from the main streets, so your best options are to get a Grab, rent a scooter or bicycle, or get a private driver. Songthaews are a possibility, but you’ll need to know where to go once the driver drops you off on the side of the road (again, it’s a bit tucked away in the backroads). I am not aware of any local buses that go by there.

Often grouped together as the “heaven and hell temples” because of the light, ethereal quality of the White Temple and the dark, perhaps macabre vibe of the Black House (not to mention their names), the two were not built to be each other’s opposites.

In fact, despite the visual differences, the two masterpieces and their creators are actually quite alike. Both are first and foremost art installations, and both artists have incorporated Buddhist imagery into their works (though Kositpipat is a devout Buddhist while Duchanee proclaimed his nonreligiousness). Both their artistic styles were initially considered on the fringe and even sacrilegious at points, though nowadays both are renowned as Thailand’s foremost contemporary artists.

And both men worked on their masterpieces for decades on end. Duchanee lived at the Black House and continued to add new structures and buildings to it until he died in 2014. Kositpipat has been working on the White Temple since 1997, and when I visited in November 2017, I saw yet more buildings in the works. He has said in past interviews that he hopes to achieve his full vision for it by 2070. (I assume this would be via his disciples since he’d be 115 years old by then.)

Plus, there are creepy and hellish elements to the White Temple, just as there are holy and seemingly ordinary parts of the Black House.

Perhaps, ultimately, how you see the two and their relationship to each other is a reflection of your own views on life and death, heaven and hell. For me, they were just two incredible works of art, contemporary renderings in a country with an architectural style rooted in tradition.

Do the White Temple and Black House overturn your idea of Thai architecture? 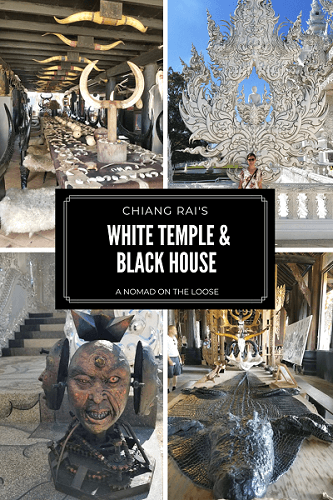 10 thoughts on “Heaven and Hell: The White Temple and Black House of Chiang Rai”