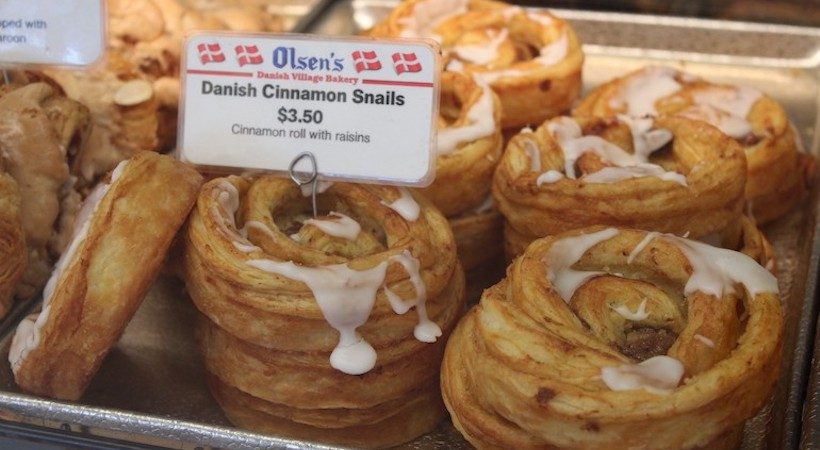 Sometime around six months into the quarantine life, I decided I need something that looked a little different. I zoned in on Solvang, a Danish-American city in Santa Barbara County. I had no real idea what to do in Solvang or whether there were actually people of Danish descent who lived there, but it intrigued me.

And so Solvang and the balmy weather led us to southern California, and we finally got to visit in mid-January.

Solvang is indeed adorable and different, darling in its own way, and there are a number of fantastic things to do in Solvang. It’s a perfect day trip destination.

When to visit Solvang

For maximum Danish-ness and excitement, visit Solvang on one of the city’s many festival days. This includes the Danish Heritage Festival on Solvang Danish Days, the fall harvest Solvang Grape Stomp, and Solvang Julefest during the holiday season.

Otherwise, Solvang is situated in Santa Barbara County where it’s pretty much nice weather all year round in my opinion. More chance of rain and nighttime lows around 40 in the winter; more chance of sweating and daytime highs around 90 in the summer.

Where to stay in Solvang

Solvang is not a large city, measuring only 2.43 square miles. But since it is a tourism city, it’s got a number of hotel options to choose from. Most are pretty well-rated as well!

If you are staying elsewhere (we made it a day trip from SLO), no worries! Perhaps my favorite logistical aspect of Solvang is all of its free public parking lots. Each with restrooms, too. Great for the day tripper!

1. Eat at all the Danish bakeries

Seriously, don’t eat breakfast before you head to Solvang.

One of the highlights there is going from one Solvang bakery to the next and trying out all of the different Danish pastries.

My absolute favorite was the Danish cinnamon snail from Olsen’s Bakery and Coffeeshop. Their kanelsnegle was the flaky type, a puff pastry cinnamon roll with raisins that reminded me more of a kouign-amann than a Cinnabon-type cinnamon roll.

Other delicious traditional Danish goodies to try include the kringle (which are also sold in pieces if you don’t want an entire kringle), aebleskivers (aka Danish pancake balls), and Danish waffles (think: puff pastry cigars with jam).

So which one is the best bakery in Solvang? I truly can’t say. There are 5 of them within a 5-block area, so I’d highly suggest you just eat your way through all of them instead 😉

2. Check out the Danish architecture

Then walk off some of those calories (okay fine, it’ll be like 1% of what you consumed) by checking out all the Danish architecture around town.

With their thatched roofs, traditional windmills, and half-timber facades, the buildings of Solvang are the defining characteristic of the city, known as the Danish Capital of America.

While some were mandated in this style starting in the late 1940s when the idea of promoting Solvang as a “Danish village” attraction came to be, there are still some pre-tourism buildings. The old folk school, for example, was built in 1911 and now houses the Bit O’ Denmark restaurant.

As you’re checking out the architecture, make a game out of spotting all the storks around town!

For the Danish, storks are a symbol of good luck. So in Solvang, they nest above many buildings. See if you can find them all!

(Unfortunately, the European White Stork is now officially extinct in the wild in Denmark.)

It’ll also be hard to miss the windmills.

I’d always associated windmills with the Dutch, but it turns out there are plenty of windmills in Denmark’s history as well. Today, Solvang has four wooden Dutch windmills located in its busiest areas.

Fun fact: Denmark is one of the world’s largest harvesters of wind power. You’ll see more wind turbines than wooden windmills in the country these days.

5. See the sights of Copenhagen

It’s not just the food and architecture that’s inspired by Denmark, either. Solvang also has replicas of some of Copenhagen’s most famous landmarks.

First up, the Little Mermaid.

No, not Ariel. The famous statue by Edvark Eriksen that is one of Copenhagen’s most famous attractions. (It was inspired by the Hans Christian Andersen fairy tale though!)

Solvang as an authorized copy of it near the corner of Mission Dr. and Alisal Road. I did not realize it was a half-size replica before we got there and almost missed it because I was looking for a much larger sculpture.

Another replica from Copenhagen is the Round Tower, aka Rundetaarn. The original one is a 17th-century astronomical observatory. The Solvang one was built in 1911 at one-third the size, and houses a pizzeria.

Speaking of Hans Christian Andersen, you’ll find nods to the legendary fabulist everywhere in town. My favorite is the park named after him.

It’s an unassuming park with a castle facade for an entry. But it’s a great spot for some shade and nature when the sunny, crowdedness of downtown Solvang gets to you.

If you like wheels, there’s unexpectedly a skate park inside Hans Christian Andersen park as well!

All of the museums were closed when we visited due to COVID restrictions, but Solvang is home to museums of all flavors.

There are the Danish-associated ones you’d expect, such as the Hans Christian Andersen Museum, as well as unexpected offerings such as the Solvang Vintage Motorcycle Museum.

Yes, I know I started with Danish bakeries, but there’s more than Danish baked goods in town. Make sure to stop by one of the Danish restaurants to enjoy the traditional cuisine.

Full disclosure, I don’t think I’ve ever had Danish food in the past, so I can’t judge how authentic it was.

We visited Solvang Restaurant and got this combination plate. It included a Danish-style meatball and a Danish-style sausage, along with Danish-style red cabbage, potatoes, veggies, and a pea soup. It reminded me a lot of the food in Germany and the Czech Republic. In other words: good and wholesome, especially on a colder day, but not something that I can see myself craving all the time.

Much as you would expect of a city that depends on tourism, Solvang has stores selling all sorts of goods. There’s everything from ordinary clothing boutiques to specialty Danish stores to art galleries.

Of note are Elna’s Dress shop, which sells custom-made traditional Danish outfits; Fairy & Frog, a floral and fairy shop that reminded me of Spellbound Herbs in Cambria; and Hanson’s Clock Shop, which are full of clocks and other goods from the Old World.

Special callout: Don’t forget to visit the clog outside the Solvang Shoe Store.

It did not come in Kokomo’s size.

One more callout among the shops: Jule Hus.

If you love Christmas, Jule Hus has Christmas all year round. Seriously! It feels like a Hallmark (or Netflix) Christmas special no matter what time of year you visit.

If walking entire cities isn’t your thing like it is mine, you can also rent a Moke. We saw folks driving these electric Jeep-like golf carts all around town. They can go up to 30 miles per hour, come in colorful colors, and looked like a fun way to explore Solvang if you are short on time or have traveling partners who are less inclined to walk everywhere.

Want something halfway between those options? Solvang also has surrey cycles for rent. Yep, those multi-person cycles that you peddle.

Believe it or not, there’s more than just Danish stuff in Solvang!

Even as all the food and architecture speaks to Denmark, seeing Mission Santa Inés unmistakably reminds you that we are right back in California.

It is one of the original Spanish missions in California, and today, it sits on a giant plot of land overlooking the valley just outside of downtown Solvang.

Note: Like most missions, it has a complicated and dark history of forced labor and control of indigenous peoples and negative impact on the land. I grew up in California learning about and visiting the missions in school, yet little was taught about these aspects of the Spanish missions and missionaries after which so much of our state was named. I typically avoid writing about them because of this, but since this mission shows a different side of Solvang before the Danish arrived, I wanted to include it.

Even if a Spanish mission was unexpected but not surprising, Ostrichland will probably surprise most visitors to Solvang.

Yep, just outside town, there’s a 33-acre ostrich and emu farm with more than 100 of these giant birds just roaming around.

Ostrichland USA was closed due to COVID when we visited, so we were only able to see the ostriches from the road. Look at how huge these animals are, even from far away!

15. Enjoy the wines of the region

And of course, this is California, home of multiple award-winning wine regions.

Solvang may be best known for its Danish appeal, but it is also part of the broader Santa Ynez Valley, which is home to more than 100 vineyards. Most are located in Santa Ynez, Los Olivos, or Buellton, with a dozen or so tasting rooms within Solvang. Great for a mid-afternoon break during a day trip or a nightcap before walking back to your Solvang hotel.

Pin it to share it! Hope you enjoy all these fun things to do in Solvang! A little piece of Denmark while its borders are still closed to most.

9 thoughts on “15 Things You Can’t Miss in Solvang, the Danish Capital of America”