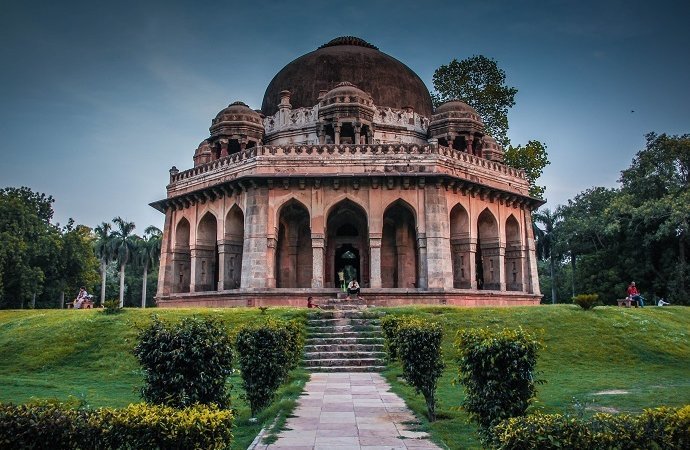 It’s a city that has gracefully withstood the ponderous influence of time. A city that is a testament to pivotal historic kingdoms in the Indian subcontinent. A city thunderous in its glory.

Delhi, India’s capital, has been monumental to the country’s history, with settlements and seats of power dating back millennia. Not surprisingly, there are many historical things to see in Delhi today.

Filled with relics that have surfaced since the Mauryan Empire (c. 300 BC), it’s the perfect city for any history aficionado. Here are some of the most captivating historic destinations in the treasure trove that is Delhi.

This is a guest post from Rohit Agarwal of Trans India Travels. Rohit, an architect by profession, occupies himself with a fascination towards monuments in the Indian subcontinent. Well-travelled and well-read, he breathes in the inanimate beauty that a heritage-rich country like India offers.

Interested in guest posting for A Nomad on the Loose? Send me a message with your ideas — you don’t have to be a travel blogger, you just have to have tips and recs or a story to tell!

Magnificent and entrenched with history, Purana Qila is one of the oldest forts in Delhi.

Archaeological excavations have discovered artifacts dating back to 1000 B.C, confirming the antiquity of this persevering fort. Even Indraprastha, the glorious city featured in the epic poem Mahabharata, is said to have existed at this site.

Purana Qila embodies a fascinating series of cultures — from the Mauryan to the Mughal — and is filled with structures reflecting the religious and cultural influences of the respective eras. It is truly a worthy destination that will transport you back in time.

Among the best-conserved monuments are the Qila-i-Kunha mosque and the Sher Mandal, which grab the spotlight with their larger-than-life architectural styles.

The Lodi Gardens are more than your typical garden. They are filled with pristine monuments from 15th-century dynasties and evokes a breathtaking charm reminiscent of the powerful Delhi Sultanate era.

Now protected by the Archaeological Survey of India (ASI), the garden includes some of the oldest pre-Mughal tombs in Delhi, including those of Mohammad Shah and the last sultans of Delhi.

You’ll also find the stunning Bara Gumbad and its adjoining mosque in the Lodi Gardens. They, along with the nearby Tomb of Sikandar, stand as a testament to the immense competence of the Lodi Dynasty.

This next landmark is a UNESCO World Heritage Site and consists of dozens of monuments built over the course of hundreds of years.

Among them is the Qutb Minar, easily the most recognizable monument in Delhi. Another stunner is the Alai Darwaza, which serves as a gateway to the Quwwat-ul-Islam Mosque. The red-sandstone-and-square-domed gatehouse uses a unique blend of Indian and Islamic architectural styles.

The Qutb complex also houses a number of ornate tombs, along with the ancient and arcane Iron Pillar, a tribute to Lord Vishu that has confounded metallurgists for centuries.

Shahjahanabad, founded by the audacious Shah Jahan (of Taj Mahal fame), was the last capital of the Mughal dynasty. Today, it is better known as Old Delhi.

It may be a mere shadow of what it was a few centuries ago, but even in its decay, Old Delhi hosts some iconic landmarks.

There are four standouts you cannot miss:

Today, it is one of the priciest and lushest areas in Delhi. While strolling around, make sure to walk down the Rajpath (aka King’s Way) and see how Lutyens aligned it with the ancient Purana Qila. Be sure to also check out the iconic Lutyens Bungalows, and take a moment to pay homage to the Indian soldiers who sacrificed their lives during the First World War at the India Gate.

From its time as an ancient settlement to its status today as an enthralling modern city, the capital of India is full of history. One cannot help but be in awe of the staggering significance Delhi holds to modern historians. All these things to see in Delhi is a must for any history buff and will leave you exhausted in your enchantment.

3 thoughts on “Must-See Delhi Landmarks for the History Buff”