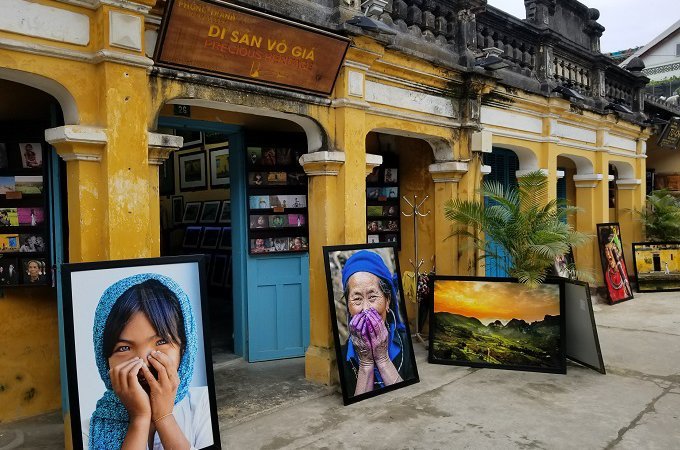 One of Vietnam’s most visited cities, Hoi An is perhaps also the easiest, most comfortable introduction to the country.

In contrast to the chaotic hustle and bustle of Hanoi and Ho Chi Minh, which can make even the most seasoned travelers wary, Hoi An feels calmer and more inviting.

Its cobblestone streets and well-preserved, UNESCO-recognized Ancient Town provide a sense of small-town charm, a quaint nostalgia of centuries past. Its coastal location and the rice paddies surrounding town also lend to the laidback feel.

Here’s how you can experience the best of Hoi An in 3 days.

Start your visit to Hoi An by strolling through its Ancient Town.

Once a prominent trading port of central Vietnam, Hoi An and its architecture is a blend of Vietnamese sprinkled with Chinese, Japanese, and European influences.

Deemed a UNESCO World Heritage Site, Hoi An Ancient Town is free to visit, though tickets are required to visit its many well-preserved buildings. A ticket costs 120,000 Vietnamese dong (VND), or roughly $5 USD, and provides access to 5 Ancient Town attractions of your choice. You can also buy additional tickets to get extra entries.

I also visited the Tan Ky house — the 7th generation of this merchant family still lives on the second floor of the house — and the Duc An house, which used to sell Chinese medicine and served as a meeting place for anti-French patriots.

For my fifth stop, I chose the Museum of Sa Huynh Culture.

While the museum is neither big nor very comprehensive, it was still fascinating to learn about those who lived in the area 2000+ years ago and see artifacts from their time.

Hoi An Ancient Town is incredibly charming, even with all the shops and restaurants, though it would be even more charming if they didn’t allow all the motorbikes — and more importantly, their incessant honking.

As you walk around Hoi An, you’re sure to see the endless tailor shops in town. Give into your wants and support the local economy by getting a few pieces tailored.

If you’re bewildered at the selection and not sure which shop to go with, start with this guide on picking the best tailor in Hoi An.

Take your time deciding what you want tailored and by whom, but try not to delay too much. Placing your orders on your first day in Hoi An helps ensure there’s enough time for fittings and alterations.

Now that you’ve had a chance to explore Hoi An’s heritage, take a step back and widen that scope by visiting the Precious Heritage Art Gallery Museum.

Founded by French photographer Rehahn, Precious Heritage is a must-see for those interested in the many ethnic groups of Vietnam but don’t have the time or ability to visit those groups (especially as some live in areas where a permit is required for visitors).

The museum is located at 26 Phan Boi Chau and free to visit. It’s filled with photographs that Rehahn has taken over years of traveling and visiting with many of Vietnam’s 54 ethnic groups. There are also many authentic ethnic costumes, including those that are the last of their kind, that were gifted to the photographer by the elders of the various ethnic groups.

If you know me or have been reading this blog for long enough, you know I love learning about ethnic minorities. This was my absolute favorite spot in Hoi An.

I hope you make it to Precious Heritage, and when you do, please, please respect the rules about not touching any of the ethnic costumes.

While I love how closely you can inspect them, I sort of wish Rehahn would put them in glass enclosures because I saw so many people disrespecting the rules and touching the costumes despite signs that say not to do so. Get your greasy hands off of these one-of-a-kind artifacts!

Check out Hoi An at night

Round out your culturally-filled day in Hoi An with some night lights and street markets.

Some of the most famous photos of Hoi An are at night, lit up by hundreds of paper lanterns, so don’t miss out on that sight.

Start by picking out a streetside vendor to fill your tummy.

One of my favorite dishes while traveling in central Vietnam was com ga, or chicken rice. The deliciously savory and fragrant chicken and rice combo made for a great meal at any time of day. Each plate is typically between 25,000 and 35,000 VND, though there were certainly times when I needed two plates to feel full.

If restaurants are more your thing, the Hoianian Wine Bar and Restaurant is a tasty pick.

The modern Vietnamese cuisine was delicious, the plating of the dishes and the atmosphere were both beautiful, and the staff provided incredibly detailed service. Prices are in the ~400k-450k VND ($17-$20 USD) per person range, alcohol included. (I actually met my friends there when they arrived in Hoi An midway through their vacation — it also happened to be my birthday!)

Then wander around the night markets. Even though I had nothing I wanted to buy, I loved weaving in and out of the crowd and checking out the goods while people watching at the same time.

Day 2: Explore outside of Hoi An proper

Visit the ancient temples of My Son

As with the day before, start day two with a UNESCO World Heritage Site.

Located approximately an hour’s drive from Hoi An, My Son Sanctuary is a legacy of the Champa Kingdom that used to rule the region.

My Son, which means “beautiful mountain,” originally consisted of ~70 temples built between the 4th and 13th century. They honor the main Hindu gods of Shiva, Vishnu, and Brahma.

It has at times been called Vietnam’s Angkor Wat. Perhaps, as both are temple complexes originally rooted in Hinduism (though Angkor Wat’s religious emphasis evolved to focus on Buddhism).

Unfortunately, a large part of the complex was destroyed by U.S. bombing during the Vietnam War.

Today, there are approximately 20 temples left of the original 70. What is left, however, has a decidedly different feel from Angkor Wat.

While I usually don’t do tours, I really recommend finding a good tour to join or a private guide for My Son. There isn’t much signage at the sanctuary, and there is so much history and context to know. The entrance fee to My Son is 150,000 VND, and tours start as low as 100,000 VND (~$4 USD).

Most tours to My Son Sanctuary start early in the morning and drop you back off in Hoi An by early afternoon. If you’re like me, you’ll likely be hungry by then.

So head to Banh Mi Phuong, made famous by Anthony Bourdain’s proclamation that it has the country’s best banh mi.

Located just outside of Hoi An Ancient Town, this spot’s easy to find as there’s almost always a line in front of it. If you want to eat in, however, just go inside and find a spot to sit; the line is for takeaways.

(Curious note: in the United States, banh mi almost always has pickled daikon and carrots, yet not a single banh mi I had in Vietnam had those ingredients. Hmm…)

Cycle out to the rice paddies

While Hoi An city center is nice, don’t forget to explore beyond the cobblestone streets. Rent a bicycle and cycle out to the rice paddies and neighborhoods around town.

Bicycle rentals are quite inexpensive in Hoi An. You can usually rent them from your hostel for roughly 25,000 VND for a half-day rental, or 40,000 VND for a full day; many hotels offer them to guests for free.

Despite being overshadowed by the beaches of neighbors like Thailand and Bali, Vietnam has beaches, too!

In fact, mainland Vietnam has a coastline of 3,260 kilometers (2026 miles) — or roughly 2.5 times the length of California’s coastline.

While Vietnam certainly has more beautiful beaches than those in Hoi An, the beauty of Hoi An’s beaches lies in their calm. As in, no crowds! Enjoy a slow morning walking along the shore or paging through a good book.

Then roll up your sleeves and get your chef’s hat on.

The wide range in Vietnamese cuisine was one of the biggest surprises for me when I went to Vietnam.

So much of Vietnamese food in the U.S. is centered around pho and banh mi (though bun bo hue has gotten more widely available over the years). Plus, we’re mostly privy to southern Vietnamese cooking, given the flow of immigration circa the Vietnam War (known in Vietnam as the American War).

I tasted so many new dishes in Vietnam, and in Hoi An, I made sure to learn how to cook some of it as well.

We chose a class at the Red Dragon. The class started with a market visit where we got all our ingredients along with an introduction to a variety of indigenous ingredients. Then the chef took us back to the restaurant to get some hands-on time cooking all the dishes.

I especially loved learning how the flavors of various ingredients play with each other and trying our hand at some gorgeous plating.

The Red Dragon cooking class costs 630,000 VND (~$27 USD). There are definitely cheaper options in town, but we felt the money was well worth it. We had tons of fun, and we were absolutely stuffed!

Once your belly has been taken care of, wind down your time in Hoi An with some time at the spa.

While Vietnam isn’t packed with massage shops all over the place the way Thailand is, it does have some wonderful spas. And the prices are incredible.

I highly recommend Pandanus Spa, which is located a 5-minute drive outside of city center near some rice paddies. They offer a variety of massages, body scrubs, body wraps, facials, and nail services, a la carte or as part of special packages.

It’s absolutely possible to spend half your day there — we certainly wish we did!

Quick tip: if you call them or book an appointment online, they’ll send over a driver to pick you up for free. The return trip is similarly provided.

Where to stay in Hoi An

Located smack dab in the center of town, this hostel has clean rooms with huge lockers and the friendliest staff. They have tons of fun, free activities such as spring roll making parties, and they also offer bike rentals and tours to places such as My Son and Da Nang.

If hostels aren’t quite your thing, my friends had a great time staying at Boutique Hoi An Resort on the beach. The hotel offers free shuttles to Old Town Hoi An and back so you can easily move between town center and the sandy beaches.

4 thoughts on “The City of Lanterns: Experiencing the Best of Hoi An in 3 Days”