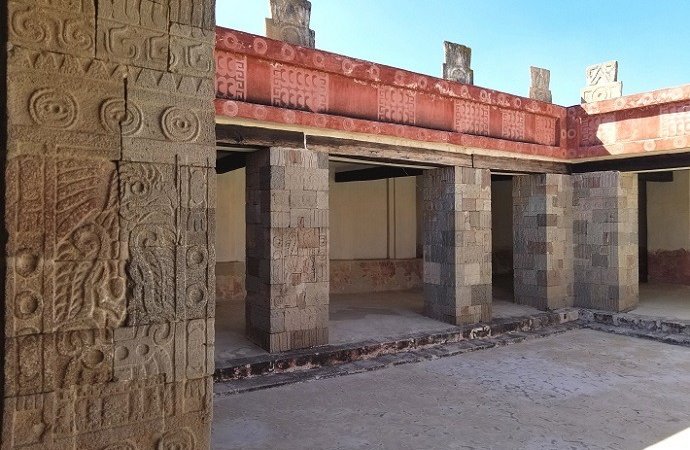 Taking a day trip from Mexico City to Teotihuacan is one of those things that you just have to do when you’re visiting the metropolis.

Located roughly an hour outside of Mexico’s capital, the pyramids of Teotihuacan are known as one of the foremost pre-Columbian Mesoamerican archaeological sites. It’s one of my favorite things to do in Mexico City because it combines culture, history, and archaeology with a whole lot of activity and sun.

As with most things, you can join a group tour or book a private one. Or you can choose two levels of DIY:

How to get to Teotihuacan from Mexico City

To get from Mexico City to Teotihuacan via public transit, head first to the Autobuses del Norte metro station. As its name suggests, the station is at the northern end of the city. You can reach it via Metro Line 5.

Once you get out of the station, the bus center itself is unmissable. Head inside and walk all the way to the left. Near gate 8, you’ll find a kiosk named “Autobuses Teotihuacan.”

Roundtrip tickets cost 104 pesos per person and are timed. Our bus was leaving three minutes after we purchased the tickets, causing a mad rush as we hurried through the (very quick) security line. (There are also no bathrooms on the buses, which made my bladder less than happy. Had we known the bus was leaving so soon, we might have asked to be put on the next bus instead. So keep that in mind!)

The bus ride is comfortable and takes just under an hour. It’ll likely stop two or three times en route, so make sure to stay on until the driver calls out “piramides.”

Once you get off the bus, the signs make it fairly straightforward where the entrance is. Tickets are 75 pesos each.

While your journey to Teotihuacan is time-stamped, you can return on any bus that has available seats. Double-check the last bus time of the day before you get off.

When we were ready to leave, we simply went back to the gate we entered through and stood on the side of the street until the next bus came. According to Autobuses Teotihuacan’s website though, you don’t have to go back to the same gate. Gates 1, 2, and 3 will all work.

When to go to Teotihuacan

In other words, go early to avoid the heat!

Good shoes, plenty of sunscreen, a hat, and lots of water are highly recommended as well.

Also of note: the complex is free to Mexicans on Sundays, so it tends to be extra crowded then. Avoid if you can!

Reconsidering doing this as a DIY trip? There are always small group tours and private ones you can book!

Visiting the pyramids of Teotihuacan

Teotihuacan can get quite crowded, so my recommendation is to climb the Pyramid of the Sun as soon as you arrive. Not only is it the most physically-taxing aspect of visiting Teotihuacan, it’s also the most popular.

If you’re physically fit, the climb up should be fairly quick. As I climbed, I couldn’t but help think about just how humans were able to build such structures thousands of years ago. (I mean, something must have happened in between them and us where human knowledge and technology went off a cliff…)

Once you’re up at the summit of the Pyramid of the Sun, spend some time to enjoy the views of the entire Teotihuacan complex laid out underneath you.

Then, make your way over to the Pyramid of the Moon, which was supposedly used for human and animal sacrifices. The climb there is significantly quicker, as you can’t actually make your way to the summit.

Don’t just hurry to climb the two pyramids and leave, though. There are plenty of other delights as you walk between these two major pyramids. The two most delightful? An astonishingly well-preserved mural of a jaguar and the Palacio de Quetzalpapálotl.

While the jaguar mural is (rightfully) roped off, you can walk into and explore Palacio de Quetzalpapálotl. Named after the mythological birds that adorned the palace, this structure still has a very intact courtyard. The details on its stone reliefs are absolutely stunning.

Lastly, before you leave this part of Teotihuacan, consider climbing up one of the minor pyramids (where allowed). Sitting atop one and taking in the scene without being surrounded by the crowds, you can almost feel the sacred nature of the place.

Beyond the main pyramids

To be honest, I didn’t know much about Teotihuacan before visiting Mexico City. I certainly didn’t realize that there was much more to it than just the Pyramids of the Sun and Moon and a few more minor pyramids.

Boy, was I wrong.

At its peak, Teotihuacan covered more than 8 square miles. (Ahem, that’s bigger than the city I live in). Today, the main sites of the archaeological complex lay around a two-mile stretch of land.

So after you’ve visited the primary pyramids, head down the Avenue of the Dead.

There are so many fascinating facets to explore, from excavated homes to discoveries that show the various layers of building that happened during Teotihuacan’s active years.

These were perhaps my favorite aspects of Teotihuacan, in large part because they’re seldomly discussed or photographed in articles about the complex.

As you approach the other end of the Avenue of the Dead, you’ll reach the citadel. There are several structures in the area, the most prominent of which is the Temple of Quetzalcoatl.

While the Pyramids of the Sun and Moon are structurally more imposing, the Temple of the Feathered Serpent was the most aesthetically interesting to me. Who can pass up these fantastical creatures?

P.S. If you can’t quite “find” the temple, it’s because it’s fully obscured by the Adosada platform (which to me was just another pyramid). I heard one disinterested dad exclaim that there was no way he was going to climb another pyramid because “they’re all the same, anyway.” Well, he and his missed out!

Museums around the pyramids

As you explore Teotihuacan, you’ll find many plaques talking about various museums and gardens around the site. The most prominent of those is Museo Teotihuacan, which holds artifacts from the site.

We didn’t get to check out the museums because we were visiting on New Year’s Eve and wanted to get back for some rest before the evening’s festivities. I definitely wish we did, so make sure to save time for this if you’re similarly inclined.

We’d arrived at Teotihuacan around 10 a.m. and spent four hours exploring. We headed back around 2 p.m., arriving at our hotel about an hour 40 minutes later. If you’re interested in visiting one or more of the museums, I’d suggest budgeting at least another hour or two for your trip.

Hope this helps with planning your trip from Mexico City to Teotihuacan! Pin it to share it 🙂