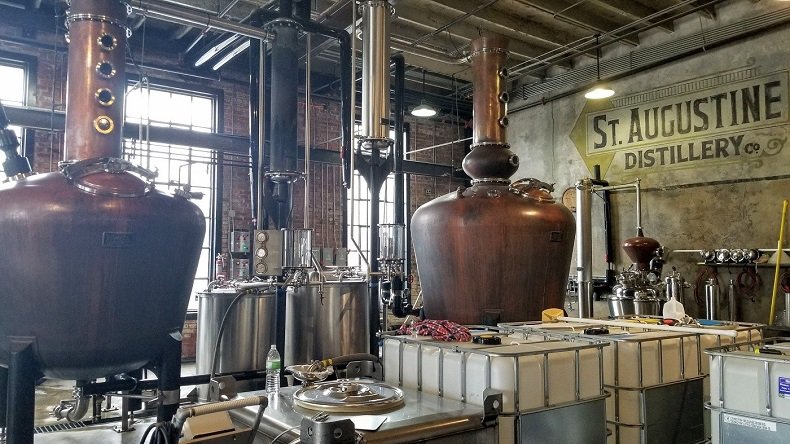 Known as the oldest city in the United States, St. Augustine is a mix of colonial Spanish roots and northern Florida charm. It’s perfect for a day trip from Jacksonville, Orlando, and Daytona — or, stay a whole weekend there! If you’re limited on time, here are the best things to do in St. Augustine in one day.

Breakfast at The Kookaburra

Kick off your St. Augustine day trip at this local coffee and pie shop downtown.

This cute little spot gives off all the feelings of that neighborhood hangout and serves up a number of house specialty coffees. Its name is a nod to its Australian-American roots, which comes to life in the pies they sell. They range from egg-based “brekkie” pies and traditional minced meat pies to inventive ones like Thai chicken chili pies.

More of a sweet breakfast person? No worries, they have the usual baked goods as well.

Built in the late 1600s, the fortress is the oldest masonry fort in the country and also the oldest structure in St. Augustine. Over its 300+ year history, it’s been under the control of Spanish, British, and American forces.

The fort reminded us of Castillo de San Felipe de Barajas in Cartagena, Colombia. This one had many more educational elements though, including ones about its dark history as a place of oppression for Native Americans in the area.

Check out cannons from various periods around the park, and if you’re visiting on a Friday, Saturday, or Sunday, don’t miss the cannon firing demonstration!

Then head over to Flagler College, aka Ponce de Leon Hotel. This prime example of Spanish Renaissance architecture from St. Augustine’s heyday includes contributions from multiple famous architects and designers.

You can explore the courtyard and rotunda on your own, or join a twice-daily tour and see the building’s many Tiffany stained glass windows and Edison clocks in closer detail.

The original dining hall serves the same purpose today — quite opulent for a college dining experience!

While you can’t eat under the stunning Tiffany stained glass windows like Flagler co-eds, St. Augustine still has many options to offer you.

This street reminds of Old Wild West towns’ main streets, of Disney’s Main Street. It’s full of boutique shops and restaurants, so it’s easy to find something for everyone’s taste.

My favorite is to pop in for a bite here and there. Is it necessary the city’s best food? No. But it’s all part of the experience.

In addition to grabbing lunch, you can explore the colonial architecture of the Pena Peck House, see the Oldest Wooden School House from the 1700s, grimace inside a medieval torture museum, and visit a Greek Orthodox shrine, among other attractions.

While you’re there, don’t forget to check out the Old City Gates at the north end of St. George Street. Passing through these striking columns was once the only way to get into the city.

Find the Fountain of Youth

After lunch, choose your own adventure between various attractions around town.

Want to see more interesting architecture and art from St. Augustine’s past? Consider Villa Zoraya Museum, a U.S. National Register of Historic Places site with a vast collection of antiquities. For those who have been to Andalusia, the villa’s original inspiration was Granada’s Alhambra!

Or, head over to the Lincolnville Historical District, and explore one of the most prominent southern communities established by freed folks after the Civil War. Lincolnville also played a role in the Civil Rights Movement as the homebase for activists fighting to ending segregation in public facilities and schools in the area.

Those are just three suggestions of dozens to choose from! You can also hop on a trolley tour and hit up more than a dozen attractions along the way.

Have an afternoon drink at an old ice plant

Once you’re done with the active exploring and want to take a breather, walk west towards a less visited part of town. There, you’ll find the St. Augustine Distillery.

This award-winning distillery is housed in the city’s first power and ice complex, built in 1907. Today, you can tour the facility in free tours that cover both a brief history of the ice plant and dig into today’s booze-making operations.

The tour ends in very generous tastings, more so than any beer/wine/liquor tour that I’ve done. They serve mini tastings of four signature cocktails made with their bourbon, gin, rum, and vodka, respectively.

Not one for liquor? You can also taste locally-made wine just a few blocks away at the San Sebastian Winery. In fact, the two places collaborate, with the distillery sometimes aging liquors in used barrels from the winery.

Enjoy southern cuisine at The Floridian

Once the distillery tasting has whet your appetite, head over to The Floridian for a satisfying southern meal.

This kitschy but adorably Floridian restaurant offers a fun atmosphere and friendly service. The food is amazing as well.

Their shrimp and sausage maque choux and the biscuits and braised pork belly platter were both absolutely heavenly. And of course, I couldn’t skip an opportunity to have some fried green tomatoes.

Get spooky on a haunted St. Augustine tour

As the oldest city in the nation, St. Augustine has its fair share of ghosts and spooky stories. So end your day trip to St. Augustine with a haunted tour.

There are a couple of different options. We chose the Ghost & Gravestones trolley tour and had a great time visiting haunted cemeteries, the Old Jail, the old drug store, and more.

Our guide did a great job making the experience entertaining and regaling us with stories along the way. And yes, there were definitely some freaky and scary moments along the way!

Despite living in Florida for many years, I hadn’t visited St. Augustine until more than a decade after leaving Florida. There was definitely way more variety of fun things to do in St. Augustine than I expected.

Hope you find this itinerary as exciting as I did! Pin it to share it!

2 thoughts on “The Best Things to Do in St. Augustine in One Day”