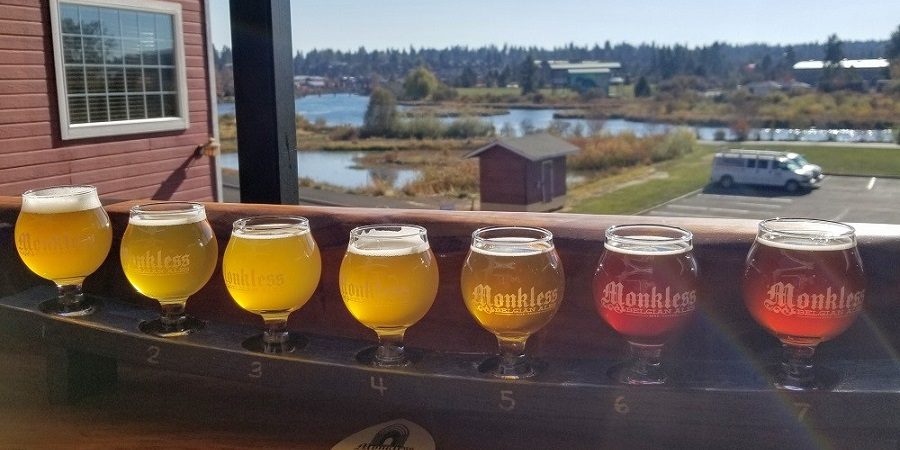 Over the past two months, I’ve drunk more craft beer than ever. After all, Bend, Oregon, is one of the top craft beer cities in the U.S., with one of the highest numbers of craft breweries per capita. Visiting Bend breweries became, well, research, shall we say?

There are more than two dozen breweries in Bend, so I had a lot of research to do. To keep it as safe as possible, we mostly stuck to breweries that had outdoor seating, were dog-friendly, and were within walking distance of our apartment in Old Bend.

Ultimately, we made it to about half of the breweries — some, multiple times — and also enjoyed brews from a few of the ones we didn’t get to visit in person.

So, after two months of drinking more beer than ever, I’m finally ready to share my guide to the best breweries in Bend, based, of course, on my taste buds and opinions.

To make sure you don’t miss any gems, I’ve also made sure to include breweries that are technically outside the city of Bend but in the same metropolitan area. Many of these breweries have taprooms in the city, so it’s easy to try them out as well.

Before I kick off my reviews of Bend breweries, I have to talk about the Bend Ale Trail challenge.

Touted as the largest beer trail in the West, the Bend Ale Trail includes 22 of the breweries in the region. You get a passport, visit the participating breweries, get stamps at each, and collect prizes based on the number of Bend breweries you hit up.

There are also special challenges and prizes for designated drivers so everyone can enjoy the best breweries in Bend safely and responsibly.

Now that you know about the Bend Ale Trail, one more note before we get started: I don’t really like IPAs.

I know that can be blasphemous in some craft beer circles, but there, I said it. However, my partner loves IPAs, so I’ve considered his opinions as well.

Instead, I tend to gravitate toward golden ales and wheat beers like Hefeweizens and witbiers on the lighter end and malty porters and stouts on the darker end. I’ll also pick up a sour or amber when I want something in the middle.

Overall, you really can’t go wrong with any of the Bend Ale Trail breweries. Most have ample varieties of brews to satisfy every palette, and sometimes choosing where to visit is about what else they’ve got.

So besides the brews themselves, I’ve also made notes about each brewery’s food offerings, dog-friendliness, outdoor seating options, and more.

The Bend breweries with the best food

Beyond the beer themselves, a brewery’s food is also really important to me. I love craft breweries that either do pub food really well or take it to the next level with a twist.

10 Barrel is one of the more well-known Bend breweries, with broad distribution thanks for its new owners, Anheuser-Busch. They have two brewpubs in Bend, one on the west side a stone’s throw from our apartment, and another on the east side of the city.

While most of their beer is hoppier than I like, 10 Barrel is definitely the best Bend brewery for pub food. Their elk burger is a dream.

Seriously, even if you don’t drink beer, go to 10 Barrel and get their elk burger. You can thank me later.

If you’re looking for non-traditional pub food though, you must visit Monkless Belgian Ales.

Housed in a Swiss chalet-like building just off of the Deschutes River, Monkless Belgian Ales makes you feel like you just hopped on a jet and landed in a Belgian monastery.

Fittingly, their food menu has many Belgian specialties, including moules-frites and waterzooi, plus other foods from that general region.

Monkless is also the Bend brewery where I liked almost every beer in the house. Of course, that’s because they specialize in the types of beers I love the most: strong, flavorful, and not so hoppy.

This one is technically based in Redmond, a city just north of Bend, but Cascade Lakes also has an outpost in west Bend.

If that healthy option sounds repulsive and you’d prefer to stick with the regular, head to Three Creeks Brewing.

Based in Sisters, the Old Wild West town just northwest of Bend, Three Creeks serves up quintessential pub food alongside a variety of tasty beers.

Deschutes is the OG Bend brewpub, founded back in 1988 when Bend had less than 20,000 residents. It doesn’t necessarily have my favorite beer in Bend or the best food ever, but it does well in both areas and is a great brewery to visit if you want to taste test a brand that you can buy at retailers across the U.S.

The most dog-friendly breweries in Bend

Since we have a pup, we’re always evaluating just how dog-friendly every place is. Bend is one of the most dog-friendly cities I’ve lived in, with few places saying no to our four-legged canine buddies.

In fact, almost every single brewery mentioned here allows dogs. But there are definitely some that are more dog-friendly than others.

We became enamored with Crux during our first visit to Bend — and long before we even got Kokomo. The wide-open expanse of Crux makes it perfect for idling an afternoon away with friends and pups.

Crux is heavy on the IPAs but also has a variety of other options. That, plus food trucks and a giant outdoor space with plenty of sun? I can’t think of a better summer afternoon. (The cold weather doesn’t stop us though! We’ve been to Crux more than any other brewery in Bend.)

GoodLife Brewing is a little hard to accidentally walk by as it’s tucked into a big lot on the west side of town, but it’s got a fantastic outdoor area with plenty of space for people and dogs as well as a fire pit for the cooler nights.

You can order their best-sellers outside or order inside for the full tap list. GoodLife Brewing also has a great in-house menu, including a BBQ brisket grilled cheese that was heavenly.

We’d visited Deschutes and Crux during our first visit to Bend. During this slo-madic stay in Bend, Immersion Brewing was the first brewery we explored.

Immersion Brewing has a sun-filled patio area with 6-8 large tables that are perfect for social distancing. It was also perfect for a young Kokomo to explore without being intimidated like at some of the other breweries that have more dogs around. The staff is also super dog-friendly, and dog bowls are available if you forget to bring your own.

This year, more than ever, outdoor dining has become a lifeline for both restaurants and folks itching for some normality.

Many breweries in Bend already had outdoor seating options and spruced up their spaces with heat lamps and such, while others sprung into action and added outdoor spots.

We’ve yet to become comfortable with the idea of indoor dining during COVID, so we’ve stuck to enjoying Bend’s many breweries outdoors, even when the weather dropped into the 20s and 30s.

The second-oldest Bend brewpub has a huge outdoor space right on the banks of the Deschutes River.

Besides the beautiful backdrop, Bend Brewing has spaced out dozens of tables really well, with more distance between each than probably any other brewery in town. There’s also plenty of space for the pups to explore and play together.

If you’ve visited or lived in Oregon, you’re probably familiar with McMenamins as an institution.

There are currently 62 McMenamins locations in Oregon and Washington, ranging from brewpubs, breweries, hotels, theater pubs, music venues, and those that are a combo. The one in Bend is called McMenamins Old St. Francis School and includes a brewpub, a theater, a hotel, a soaking pool, and a hidden bar.

Besides the interesting combos, a distinctive feature of McMenamins locations is that many are in old historical buildings. The Old St. Francis School, for example, was indeed an old Catholic schoolhouse.

To us, McMenamins was the best brewery in Bend for cold-weather dining. Besides heat lamps, they also have real fire pits that get you oh so cozy. We joke that we’re bringing stuff for s’mores next time!

As its name states, this craft brewery is located in Sunriver, a resort community just south of Bend. Sunriver Brewing has a brewpub in Bend though, a spot that has sidewalk tables in the front as well as a big back patio.

If you go, definitely get the Cameron’s Crest. It’s the most memorable beer we had in Bend. Too bad they don’t really distribute it — growlers only!

Because we focused on breweries that had outdoor seating, were dog-friendly, and were within walking distance of our apartment in Old Bend, we did not hit up all the breweries in town.

That doesn’t mean we didn’t try their beers though. In addition to all of the breweries above that we visited we also enjoyed brews from Spider City Brewery, Worthy Brewing, Boneyard Beer Pub, and Kobold Brewing.

Bonus: J Dub – okay, J Dub isn’t actually a brewery itself, but it deserves an honorable mention because it’s got a pup menu — and get this: with pooch hooch on tap!

Like many other restaurants in town, J Dub’s tap list includes beers from multiple local breweries, so it’s also a good place for sampling multiple breweries without moving your butt.

No time to hit up all the breweries or simply not comfortable eating and drinking out yet? Hit up the Trader Joe’s or Market of Choice in town — both have wide selections of local craft brews to choose from!

11 thoughts on “The Best Breweries in Bend: A Research Project ;)”