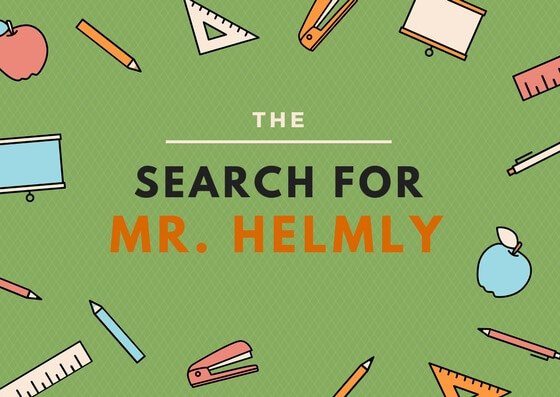 When I first came to this country, I was a shy little kid who only spoke as many as 20 words in English and had the hardest time saying “Tuesday” and “cinnamon.”

It’s very possible that if I hadn’t had Mr. Helmly as my teacher I would be a very different person now, one who wasn’t as outgoing and certainly not one who is pursuing a career in broadcast journalism.

Mr. Helmly was a teacher that on the surface looked incredibly scary but was as sweet as honey. He was a strict disciplinarian and at the same time he created the most fun classroom environment ever. By the time I first met Mr. Helmly, he was in his 50s, a lifelong bachelor who had forgone the architectural riches of his father and spent his life teaching children. He had one sister (and some nieces and nephews I believe) whom he doted on. In appearance he was austere, a tall and bald man. I remember being scared by him and crying the first day when I got home.

Well, that’s not exactly how it happened.

I started 3rd grade in a class with a bunch of friends. My English was still broken and technically I was still going to be continuing ESL (English as Second Language) classes like I had done for the 5 months prior during 2nd grade, but when you’re a kid, language is learned through interaction and it’s really not a huge deal if you can’t communicate everything through words. At least back then it wasn’t. Nowadays kids seem to be meaner and harsher toward those who are different. So about a week or so into the school year, me and about three other kids got pulled from the class and moved to Mr. Helmly’s class, which was full of 4th graders. We had no idea what was going on. I can’t remember for sure, but I think the other kids’ names were Calvin, Lucille and Melinda, and at least two of them were from either Washington or Oregon. We huddled together and were upset that we were being moved. They were new students too. I cried when I got home because now I didn’t know anybody in my class. We never really found out why we were moved. Later on it was assumed that it was experimental in order to see how it would affect kids when they were put in mixed-grade classes.

I remember hating the move, but I am so glad I was moved. It was in Mr. Helmly’s class that I really flourished. I learned so much about just about everything, and mostly through unconventional means. I was already a voracious reader because I wanted to learn English faster, but Mr. Helmly helped push me further. He pulled me out of ESL classes and instead just had me immersed with everyone else. Book reports were weekly, and whereas I started that school year reading 25-page books from the second-grade color books series, by the end of the year I was on 150-page books meant for the 4th grade. (When 4th grade English classes did come around, my English teacher gave Mr. Helmly an earful for letting kids read books that were on her curriculum… mostly because it meant she had to go find other books for me). Geography was learned by playing on a giant sidewalk map, science by virtual dissections done on the computer, and so his tactics went on.

Essentially he taught his 3rd graders as 4th graders. And that meant we had only forward and upward to go. When it came around to the end of the school year, I had come to love Mr. Helmly so much that I asked my mother to ask the principle, a Mrs. Judith I believe, to make sure I was in Mr. Helmly’s class the next year as well. And so I was.

By then I was the lady of the room – I knew who he referred to when he said that (like when dismissing to go to lunch and such). Fourth grade was another year of intense learning and lots of fun. He didn’t teach 5th grade so I had to move on, but even in that grade I had to work on middle-school reading materials and pre-algebra since he had already had me do everything else in the 5th grade curriculum as a 4th grader.

I’ll admit one downfall though – I never learned cursive. Mr. Helmly was ambidextrous, which was always cool to see as a kid, but his handwriting was a flourish and a mess (hey! maybe that’s where I got my handwriting!), and he would always tell us not to write like him. He told us that he wasn’t going to teach us cursive because he just wasn’t the right person to teach it.

Nonetheless, Mr. Helmly remains the most influential teacher in my life. I last saw him in 2002. It was the day of the Halloween parade at the school that year, so October 2002. I moved away the next summer. I heard that he retired shortly after and since then I’ve tried various ways of finding him. And some of my efforts have resulted in others asking me to let them know when I find him because he made such a huge difference on their lives as well.

I made another call to Doyle Elementary School (San Diego) today. Hopefully they’ll follow up with me as they promised. But for everyone else out there who may have any clues as to where Mr. Richard Helmly (possibly Helmley) is nowadays, I just ask that you please let me know. He would be about 67 or 68 nowadays I believe – I remember him saying he was about two years old during the Second World War (he used to tell us stories about nickel theaters).

I hope that soon I’ll be able to add a post saying that I’ve found him, but for now, the search is on for Mr. Helmly.

Mr. Helmly also helped stoke the sense of exploration and wonder in me. I still remember his stories of traveling to the Cook Islands, somewhere very much on my bucket list because of him. Stay tuned to find out what happened next in the search for Mr. Helmly.

Have someone you want to find? Make it your new year’s resolution!

6 thoughts on “The Search for Mr. Helmly”