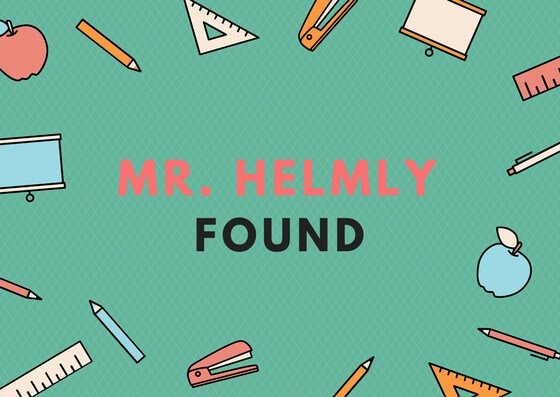 I didn’t need to open the letter. I could recognize that messy yet particular scribble as easily as I could the handwriting of my parents.

I knew I had found Mr. Helmly.

Nearly a year and a half ago, while I was still living in Montana, I posted about the search for Mr. Helmly, my favorite teacher from my San Diego elementary school who had made such a profound impact on my life.

I last saw him nearly a decade ago in October 2002, and for many years afterwards I tried to find him and thank him for his years of service shaping young minds. I called the school he taught at, reached out to other former students, and asked teachers who still worked at the school, all to no avail. When I finally turned to the blogosphere, my post resulted in a few possible leads, but mostly messages from other former students telling me they also wanted to reach Mr. Helmly to thank him. And so for a little while I continued trying.

But life always finds its way to divert you. I left my position in Montana to hit the streets of Chicago, then went overseas to live in France and travel throughout Europe and Africa. I returned to the States to finish up my degree and then went abroad again to bring a longtime interest into a full-fledged reporting project. It was only once I returned to the U.S. again that the search for Mr. Helmly began again. Finally armed with post-graduation free time, and with the help of a nifty little database, I was able to narrow down the possible Richard Helmlys based on approximate age and past addresses. And away went a little note card I penned in a handwriting not much neater than Mr. Helmly’s.

Since I received his reply, Mr. Helmly and I have been corresponding via email. I’m happy to say that he’s living a happy and active life in retirement. I have his explicit permission to share his contact information with other former students, so if you would like to get back in contact with Mr. Helmly, tell me your story and I’ll connect you with him. And while you’re at it, wish him a splendid 70th.

I’m reposting this series during these holiday weeks as I’m currently off the grid. (To find out where I am and what I’m doing, make sure to subscribe to this blog and like my Facebook page to get the latest updates! It’ll be interesting, I promise.) Moreover, these posts on Mr. Helmly have helped dozens of his former students reconnect with him, so I wanted to make sure they have a new permanent home before I shut down my old blog completely.