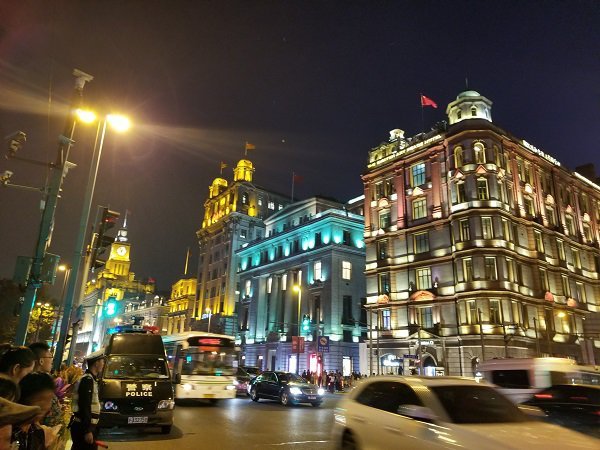 If I’m to be honest, there really wasn’t all that much that drew me to Shanghai.

Big cities with their tall skyscrapers don’t appeal to me that much, and what historical and cultural goods the city housed paled in comparison with what’s in cities like Beijing. But since I was headed out to the region, I figured I’d swing by and check it out for a few days.

I had an amazing time in large part due to the friends I made and because the weather was surprisingly pleasant during those November days. My general suggestion would be to spend a day or two in Shanghai and then make your way to nearby places such as Hangzhou and Moganshan.

Here’s what to do and see in 1 day in Shanghai if you’re like me and just passing through.

Grab breakfast on your way out toward the Bund. Despite being one of China’s biggest cities, Shanghai is still filled with tons of small vendors selling all sorts of delicious dishes for what amounts to pennies in USD.

My favorite for when I’m on the go are baos with all sorts of meat and veggie fillings. If I have the time to sit down, I love a hot bowl of Fujian-style wontons.

Tummy satiated, start your morning with a walk along Shanghai’s famous waterfront.

Take note of the Oriental Pearl Tower and other monumental structures on both sides of the river, and don’t miss out on some crucial history about Shanghai and the Bund at the Bund History Museum. It’s hidden underneath the Monument to the People’s Heroes that towers over one end of the Bund (near Waibaidu Bridge).

Next, hop on an Ofo or Mobike bikeshare bike and ride through the old French Concession. Alternatively, take a subway there and explore the neighborhood on foot.

Then head over to my top pick for Shanghai: the Propaganda Poster Art Center.

Situated in the basement of an apartment building, the collection of rooms is packed with propaganda posters from the past 70 or so years. The posters are arranged in chronological order and accompanied by captions providing light context, though it’s useful to have some modern Chinese history knowledge or a search engine at your fingertips.

For me, it was surprising to see just how blunt the captions were about some of Mao’s massive policy failures that led to the deaths of millions. It was also fascinating to see how the propaganda evolved over time as China’s relationship with other countries and its own political factions changed.

Note that the place can be a little hard to find. The address is 868 Huashan Road and what you’ll see when you arrive will look like a gated apartment complex.

I was super confused at what I should be looking for, my only intel being the name and address of the museum. But it is indeed inside this block of buildings.

Smile and nod at the gate guard and walk onward to find building B, and then proceed to the basement. Admission is ¥25. Photos aren’t allowed but you can pick up replicas of many of the featured posters in the small gift shop.

If you’ve ever had a potsticker, a soup dumpling, and a bao, think of something that’s like all three combined into one.

These delicious baos are traditionally filled with pork but now have other filling options, and when you bite into them, there’s a delicious soup that spills out.

I had these multiple times while in Shanghai because I love all things doughy and all sorts of dumplings from around the world. They’re also surprisingly filling. Four is adequate for most people (or six when I’m hungry!).

There are plenty of options to try sheng jian bao while in Shanghai, with Yang’s Dumplings being the most prominent chain and the easiest to find for English-speaking visitors.

Work off those baos with a stroll through People’s Park, one of Shanghai’s biggest and prettiest public parks.

If you’re lucky enough to be there on a weekend, make sure to stroll through the marriage market in the People’s Square. From roughly noon to 3 p.m. each Saturday and Sunday, parents put up personal ads for their adult children in hopes of finding a potential match.

I wasn’t lucky enough to witness this myself, but people I met said it was quite the thing to see. (Though in hindsight, if I had been around on a weekend and gone, it might have looked like I was searching for a date for myself!)

Satisfy your brain at the Shanghai Museum

This ginormous art museum is located in People’s Park and free to the public.

The museum has an incredible number of pieces covering many areas of Chinese art, from paintings and calligraphy to ancient ceramics and jade. My favorite was the gallery on art from China’s minority nationalities.

Having spent a lot of time in museums in Beijing and other Chinese cities as well as in Chinese art exhibits around the world, I went through the museum in less than two hours. But you could 100% spend an entire day in there, especially if you love art and it’s your first time in China.

Related: First time in China? Check out this packing list for first-timers.

Head back to the Bund

I know, you already went once. But I truly think it’s worth going to the Bund both during the day and at night when it’s all lit up. I’ll let the photos speak for themselves.

While you’re in the area, stroll through Nanjing Road, a pedestrian street that is Shanghai’s top shopping spot. I had no interest whatsoever in the stores, but people-watching there at night can be fascinating.

Hit up the night markets

I have to admit that Shanghai’s night markets are terribly sad in comparison to those in southeast Asia or even in other places in China. But alas, it’s hard for me to skip out on street food.

Changli Road Night Market is one of the premier ones in Shanghai, and there you can feast on a variety of foods from around China.

Planning for 1 day in Shanghai? Pin it to save it and share it! 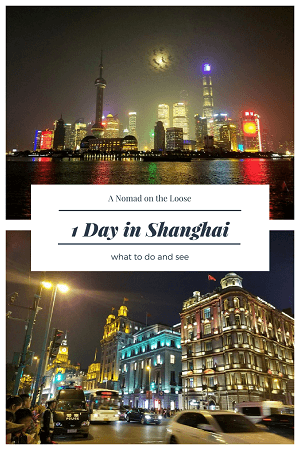