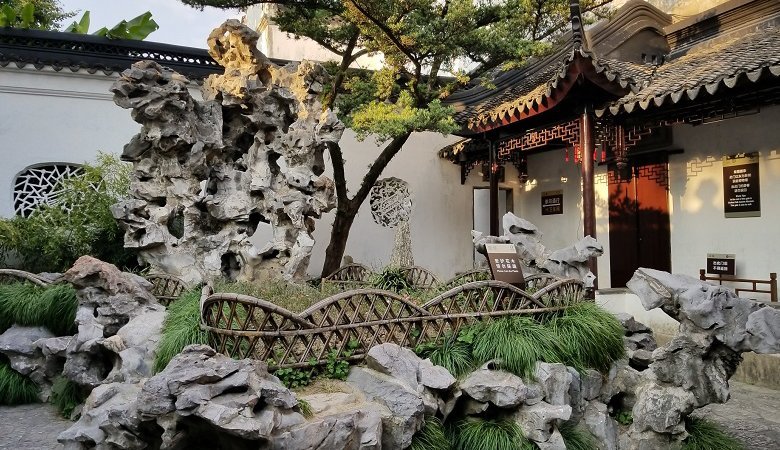 Hangzhou is one of the two cities named as “heaven on earth” in the old Chinese saying. The other is the nearby city of Suzhou. Like Hangzhou, Suzhou has long been a source of inspiration for poets and painters.

Follow this list of Suzhou things to do to explore and admire this place that’s long been a source of inspiration for poets and painters.

Venice of the East

Crisscrossed by a network of canals, Suzhou has also been called the Venice of the East. In fact, there are even hand-rowed boats just like in Venice, complete with singing if you choose to pay extra for it.

Motorized boats are also available on the Suzhou Grand Canal, where you can explore the artwork on the undersides of Suzhou’s numerous bridges.

But by far the most famous attractions in Suzhou are its gorgeous gardens. And their popularity is well-deserved.

The Classical Gardens of Suzhou are collectively an UNESCO World Heritage Site and are the epitome of classical Chinese gardens.

The Gardens of Suzhou

Today Suzhou has more than 60 of these classical gardens, nine of which are part of the UNESCO World Heritage Site listing.

My suggestion is to focus on two or three of these nine most beautiful gardens unless you absolutely adore classical Chinese gardens. Because if you go to too many, they can all start looking somewhat the same.

I chose to start with the Lion Forest Garden (also called Lion Grove Garden in English). This smaller but pristine garden is the perfect introduction to the gardens of Suzhou.

The key feature in this garden is its labyrinthine rock formations, including those that look like lions. This Yuan-dynasty garden has been the source of many paintings and poems and was a favorite of the Qing emperor Qianlong.

Entrance is ¥40 during peak season and ¥30 the rest of the year. (I can’t find my ticket stub but peak season is roughly April-October.)

If you have the time, visit the Suzhou Folk Custom Museum next door. It’s free, and it’s supposed to offer a fascinating perspective on Suzhou over the centuries. Unfortunately, it was closed on the day I went to the Lion Forest Garden and I wasn’t able to make it over there during opening hours on my other days in Suzhou.

Next, I headed to the most famous of Suzhou’s gardens: the Humble Administrator’s Garden. This huge garden covers nearly 13 acres and is the most renowned due to its architectural designs and landscaping.

The best time of the year to visit is apparently toward the end of summer when the lotus bloom makes the Humble Administrator’s Garden even more beautiful and out of this world. Unfortunately, by the time I visited at the end of October, the lotus bloom was already over. I’d say it’s still pretty amazing though.

Expect to spend at least one to two hours in this garden, if not longer.

And go early if you can. Tour groups start swarming in around 8:45 a.m. and it’s horrifically crowded, even during the off-season. Trust me when I say it’s much easier to stroll in peace and be engrossed in your own thoughts when you don’t have to dodge crowds and be disturbed by tour guides shouting at their groups.

Tickets are ¥90 during peak season and ¥70 otherwise. There’s also a VR experience museum inside, but that costs an additional ¥50.

The Humble Administrator’s Garden also has a few nearby museums worthy of a visit.

Right next door is the Garden Museum that explains classical Chinese gardens, and then there’s the adjacent Suzhou Museum, another free one that houses tons of ancient Chinese artwork. The latter was designed by the renowned Chinese American architect I.M. Pei.

Once you’ve had your share of gardens, bridges, canals, and museums, make sure to swing by Pingjiang Road to indulge in Suzhou’s street food. This pedestrian street (unfortunately often disturbed by speeding scooters) is packed with delicious options.

You’ll especially enjoy Suzhou food if you have a sweet tooth, as everything is a little sweet. If you’re more of a savory person, however, no worries either. The street also has delicious savory bites from across the country.

Word of caution: do not buy these neon-colored fruits no matter how enticing they look. Let’s just say you might need bathrooms nearby after consuming these. Fruit vendors around Suzhou sell these, but even local tour guides take the time to caution people against buying these unnatural looking “fruits”.

Instead, focus your attention on all sorts of sweet, glutinous, and fried goods. Some key specialties to try include Suzhou “old” yogurt, sweet porridge, osmanthus cakes, and crab osmanthus fritters.

Which of the two heavens on earth seems more interesting to you? Suzhou or Hangzhou?

Pro tip: Both cities are awesome day trips from Shanghai, with the high-speed train to Suzhou clocking in at under half an hour. A high-speed train will also take you from one heaven on earth to the other in less than two hours.

7 thoughts on “Heaven on Earth: The Gardens of Suzhou”