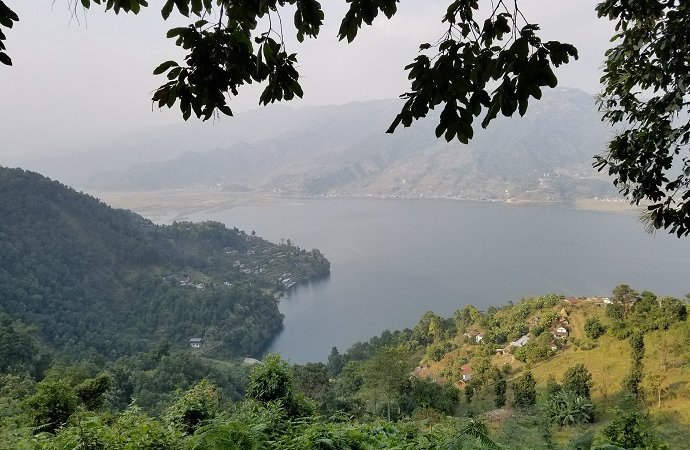 If the chaotic hustle and bustle of Kathmandu felt overwhelming to you, head west to Pokhara.

This lakeside Nepalese city of a quarter-million certainly isn’t small, but compared to the nation’s capital, it feels like a tranquil respite. Plus, it’s the perfect jumping off point for trekking the Annapurna mountain range.

To get you started, here are the best things to do in Pokhara in one day. It’s sequenced so you start on the west side of town where it’s less populated and then return to the side with more restaurants, hotels, and hostels.

Quick note: This entire Pokhara itinerary can be done on foot, but you can obviously rent a scooter or hail a ride if you’d prefer.

Start your day by walking to the Gupteshwor Mahadev Cave. It’s hard to miss the bright, rust orange spiraling pathway down.

Known as one of the longest caves in Nepal, Gupteshwor Mahadev Cave is sacred to Hindus. It houses a natural formation that is worshipped as a Shiva lingam and is home to other sacred statues. (It’s sacrilegious to take photos of the Shiva temple though.)

For me, the natural formations of the cave are more interesting. The stalagmites and stalactites, the changing of the cave as water continues to drip, and of course, the underground waterfall.

You’ll see it when you get to the end of the cave. Technically, the waterfall is very much above ground as well — it’s known as Devi’s Falls. The cave is just where it empties out, but it’s still pretty cool to see.

Entrance for foreigners is 100 Nepalese rupees (NPR), which is less than one U.S. dollar. If nothing else, it’s a fantastic chance to experience a sacred cave along with locals who are coming to worship.

Just make sure to wear sturdy shoes. The cave is rather wet and can be slippery!

Climb to the Peace Pagoda

Next, continue walking to the Peace Pagoda.

Undeniably Pokhara’s most famous attraction, the Peace Pagoda sits upon a hill overlooking the city. It’s one of more than a dozen peace pagodas around the world, built by the Japanese Buddhist sect Nipponzan-Myōhōji-Daisanga.

To me, the pagoda itself wasn’t all that fascinating. By this point in my travels, I’d literally been to hundreds of pagodas, temples, and Buddha statues.

But the climb up and down is well worth the views.

Visiting the Peace Pagoda also provides you the chance to experience a little bit of Pokhara outside of the main city center.

That’s the main reason I’d highly recommend walking to the Peace Pagoda instead of getting there on wheels. It gives you a chance to see the city and its people, eat in local restaurants that don’t often serve tourists, and stop in local shops.

Once you’re done checking out the Peace Pagoda, hike down the side that faces Phewa Lake.

The lake is the heart of the city, and it’s a fantastic spot to rest your legs and take in the beauty that is Pokhara. (There are also tons of cute little hideaways all around the lake!)

To get back to the more populated side of the city without having to go all the way around the lake, hire a boat.

Boats are 500 Nepalese rupees each — you can probably fit max 3 people on a boat — plus 10 NPR per person for the mandatory life jacket. As part of the journey, the oarsman will also take you to the small island in the middle of the lake. The Tal Barahi Temple on that island wasn’t much of a draw for me, but it sure was beautiful to be out on the water.

Relax with a massage

If you hiked from your lodging to the cave and pagoda, you’ll likely be ready for a breather in the afternoon. For that, go to Seeing Hands Blind Massage Clinic.

The clinic trains and employs folks with visual impairments who would otherwise have limited job opportunities. Massage that does a social good? Win-win!

Okay, this one is totally an expat and tourist thing, and it’s so unlike me. But there isn’t all that much to do in Pokhara proper in the evenings, so the Movie Garden is a nice diversion.

This outdoor movie theater is nestled on a hill and plays the classics (we saw Amelie). It’s sort of set up like a tiny amphitheater with both covered and open-air seating. The friendly staff collects the 350 Nepalese rupee admission and sells pizza, popcorn, and Nepalese craft brews for a fun night out in the mild Pokhara evenings.

Where to eat in Pokhara

And of course, you can’t go through your day without some delicious Nepalese food!

There are a lot of options in Pokhara, and this is by no means a list of all the places you should eat at. These just happens to be the ones that made an impression!

Where to stay in Pokhara

Given my backpacking budget in Nepal, I stayed at Pokhara Backpacker’s Hostel.

It’s not the cheapest hostel in town, but it’s super clean and had the comfiest beds I’d ever had in a hostel. (Honestly, the beds were better than those in a lot of 3-star hotels I’ve stayed at.) It’s also within walkable distance to basically everything in Pokhara (hence this itinerary!).

Hostels not your thing? No worries, the Pokhara lakeside is packed with nicer 3-star, 4-star, and 5-star options.

Are you ready to visit Pokhara? Pin it to share it!

3 thoughts on “The Best Things to Do in Pokhara”