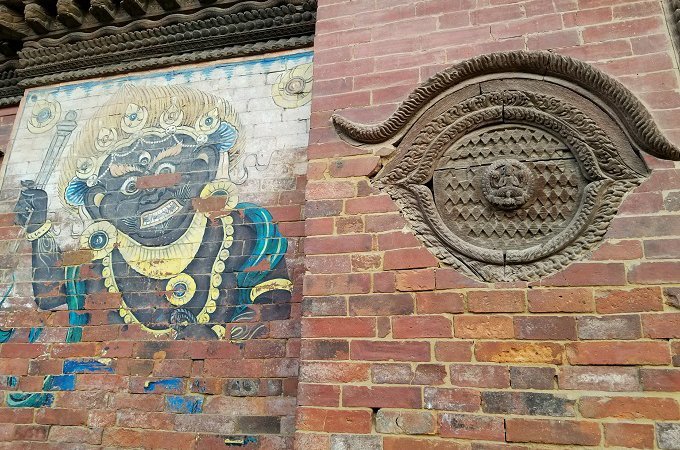 If you’ve been a regular reader, you know that I had some troubling experiences with sexual harassment in Kathmandu. It’s colored my perception of Kathmandu, but objectively, the city has some amazing cultural and historical sites that are definitely worth a visit. Plus, if you arrive in Nepal by air, you’ll most likely land in Kathmandu, so you might as well as check it out. Here’s my list of the best things to do in Kathmandu. 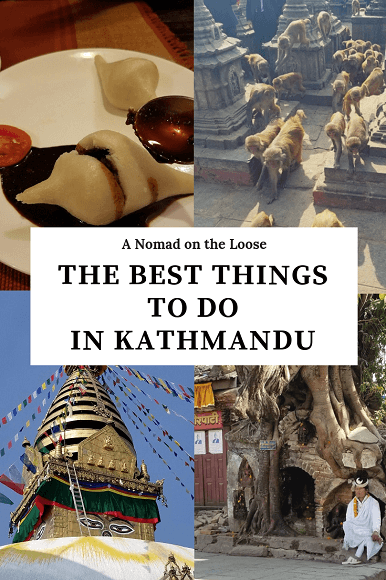 Perhaps the most famous site in Kathmandu, the Durbar Square in the nation’s capital is a shadow of its former stature thanks to the April 2015 earthquake.

But this UNESCO World Heritage Site is still worth the 1000 Nepalese rupees (NPR) it costs to visit, and it’s a fantastic introduction to Nepal and its many cultures.

There are so many fascinating things and people to see just by walking around and checking out all the parts of the square (…including some NSFW aspects).

To me, there were two learnings that were more fascinating than anything else.

There are tons of certified guides roaming the Kathmandu Durbar Square offering their services for around 500 NPR per hour. I happened to pick up this abandoned Lonely Planet guidebook at my hostel and wasn’t particularly feeling like I wanted to talk to anyone, so I forewent the guide.

But I would actually recommend having one as there’s so much historical context, plus cultural annotations, that you can’t get just by walking around. After all, the place is still under reconstruction.

To me, momos are perhaps the representative of Nepalese cuisine. But then again, my exposure to Nepalese food was rather limited before I went to Nepal.

Momos are incredibly cheap and delicious, averaging around 10 for 100 NPR, or roughly $1 USD. And I love any sort of dumplings, so believe me, I had a ton of them.

3. Try other Nepalese foods, too

Of course, don’t stop at momos.

Nepalese cuisine is very much inspired by its many ethnic groups and its neighbors, and it can vary, so make sure to try other Nepalese foods as well.

Some must-tries (pictured below, clockwise):

4. Get a little drunk on Nepalese booze

While we’re at it, make sure you try some Nepalese alcohol as well.

Namely, raksi, the distilled liquor made from fermented rice or millet that’s closely related to Bhutanese ara. This often homemade drink tastes a bit like sake.

The other main Nepalese drink to try is their homebrew — chhaang (chang, chhyang, and other similar spellings). Barley, millet, and/or rice are used to ferment this drink, and it’s often served at room temperature.

If traditional beer is more your style, make sure to try Gorkha, Everest, Nepal Ice, and Sherpa Brewery, among others.

I know, I know. I went from one Durbar Square through a lot of food and drink and brought you straight back to another Durbar Square.

Durbar Square basically refers to plazas across from royal palaces. Before Nepal was one unified country, there were many smaller kingdoms that each had their own rulers and royal palaces.

In Kathmandu Valley, there are three famous Durbar Squares: that of Kathmandu, this Patan one, and the one in Bhaktapur.

Since I travel mostly by public transit and by foot, I chose to visit Patan Durbar Square as I could walk to it from Kathmandu.

The walk is roughly 4.7 kilometers, or ~2.9 miles, and takes around an hour. It’s a nice way to explore neighborhoods outside of the main tourist hotspots.

Admittedly, the pollution in Kathmandu is the worst I’ve ever experienced and isn’t great for the lungs, so make sure to buy a good mouth mask before your walk. If you’d rather get a car, it’s roughly 300 NPR for a taxi between Kathmandu and Patan.

Like the Kathmandu Durbar Square, the Patan Durbar Square was also damaged by the 2015 earthquake, though perhaps less extensively so. Because of this, there’s quite a bit more to see and learn from in Patan.

The 1000 NPR ticket includes admission to both Patan Durbar Square and the Patan Museum, the latter of which should not be skipped.

Pro tip: If you’re on the taller side, just make sure to watch your head as you explore the museum and the various buildings open to visitors. The doorways are all super short!

6.  See the eye at Boudha Stupa 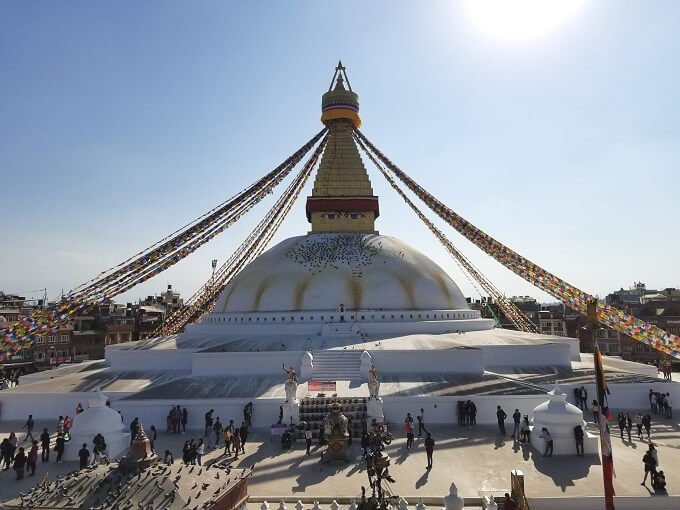 Today, the sacred place feels almost too commercialized by all the shops surrounding it. Still, there is something humbling as you circumambulate the stupa, small as a hummingbird in comparison.

The walk from Kathmandu to the Boudha Stupa is 4-5 kilometers, 50-65 minutes, depending on your starting point.

Once there, there is little enforcement around ticketing, just like many other sites in Kathmandu. But help the struggling city out as it continues its recovery, and pay for your 400 NPR ticket when you visit.

7. Fend off monkeys at Swayambhunath

Like the Boudha Stupa, Swayambhunath is an important site for Tibetan Buddhists. Besides tourists, you’ll also see many locals at both places circumambulating the stupas.

Depending on where in Kathmandu you start from, the walk there is between 2-5 kilometers, 30-65 minutes.

That’s an easy walk in the park compared to when you arrive at the Monkey Temple, where, well, there are a ton of monkeys.

Monkeys charging at people and swiping things out of their hands. Monkeys swarming people and overtaking the site. Monkeys humping each other with abandon.

So, depending on your perspective on monkeys, the 200 NPR admission is either a fantastic opportunity to visit an important religious and cultural site that happens to come with dozens of primate companions, or it’s a bit of paid torture.

Pro tip: whether in Nepal, Bhutan, or another Buddhist country, make sure to visit religious sites in a clockwise manner.

Pro tip #2: there are 365 steps leading up to the stupa, so be prepared. You can also skip the climb if you enter the complex from the backside of the temple. That way, there are only a few dozen stairs.

8. Say hello at the monasteries

While you’re up at the Monkey Temple, make sure to stick around and visit nearby monasteries like Whochen Thokjay Choyaling Monastery.

While I spoke no more than 2-3 words in Nepali and they spoke no English, the monks and novice monks of the monastery were super friendly and inquisitive. Selfies all around! 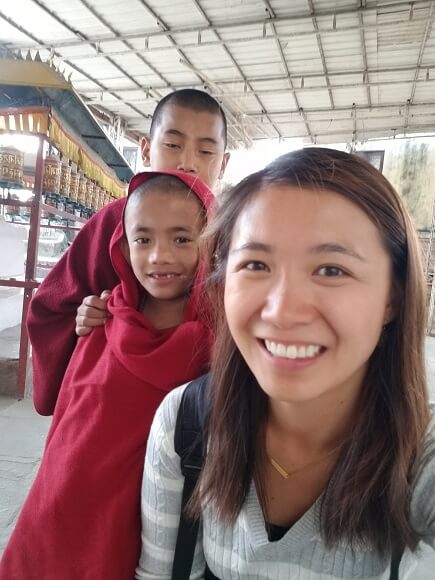 As you walk to and from all these places, keep your eye out for some cool street art in unexpected places.

Hunting down street art is one of my favorite things when traveling. And while Kathmandu isn’t known for its street art, it still has some great contenders.

I’ll let the photos speak for themselves!

10. Observe locals at the temples

This last suggestion is perhaps one of the most fascinating things to do in Kathmandu.

In a city filled with Hindu and Buddhist temples by the hundreds, there is perhaps no easier way to get a glimpse of the local habits and customs than to observe the locals interacting with these temples.

Position yourself near a few Hindu temples throughout your stay, and watch the locals as they stop by or duck into the temples, say a prayer, ring a bell, paint a red sandalwood dot on their forehead, and then go about their day.

And find yourself near some Tibetan Buddhist stupas and prayer wheels and watch as believers circumambulate and spin the wheels.

If you feel up to it, find a local who can tell you more and maybe even share these traditions with you where appropriate.

Which of these things to do in Kathmandu intrigues you the most?