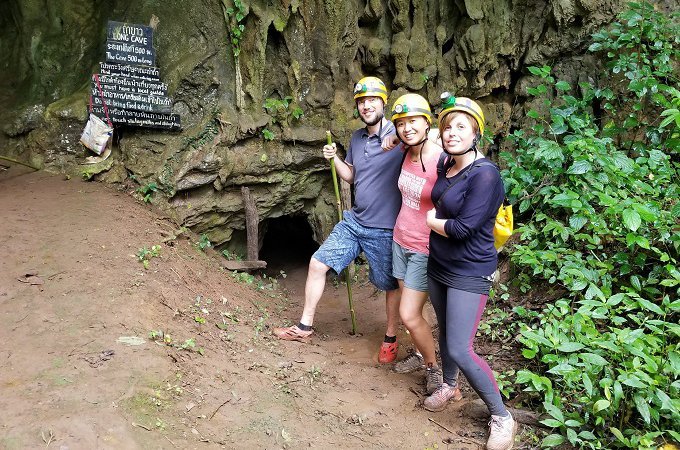 Ask people what is the most traveled country in southeast Asia, and it’s likely they’ll respond with Thailand. In fact, this ancient land of Siam has been so popular as part of the Banana Pancake Trail that it’s arguably too touristy in some parts. I definitely felt it in certain areas in the southern islands, and the country has, too. The government closed Maya Bay beach, made popular by the movie The Beach, this June in an attempt to rejuvenate this gorgeous place that has been decimated by throngs of tourists. But there are still wild sides to Thailand that hasn’t been overrun by tourists, adventures that exist if you are willing to go after them. Enter the experience of caving in Soppong.

Soppong is a small village in Mae Hong Son province near the country’s border with Burma (Myanmar). I found myself in this remote locale after having made my way up to the region to practice vipassana meditation at Wat Pa Tam Wua Forest Monastery. While I believe the truly wild side of Thailand, the last area to really be free of extensive changes due to Western tourists, to be the northeastern region of Isaan, the villages of Mae Hong Son province are still pretty pure as well. (The one glaring exception is the hippie enclave of Pai.)

The caves of Soppong

The major draw of Soppong is the 200+ hundreds of caves in and around the area (known as Pang Mapha district). There are several prehistoric caves as well as many coffin caves.

The most famous cave in Soppong is Tham Lot/Tham Lod cave. The Nam Lang River runs through this cave, one of Thailand’s largest. It has stalactites and stalagmites and sinkholes, and it’s home to thousands of bats and swifts. A highlight of the area is to visit the cave around dusk when hundreds of thousands of swifts fly inside for the night.

Tham Lot is approximately a 20-minute drive from the center of Soppong. To visit the cave, you must do so with a guide. Once you buy your ticket at the booth, a guide from the local Shan tribe is assigned to you. Your guide will then take you to various parts of the cave, pointing out interestingly shaped stalactites and stalagmites and lighting the way with their kerosene lamps to make sure you don’t get injured. It costs 150 baht for a guide for up to 3 people, plus 300 baht for a one-way ride on the bamboo raft or 400 baht for a roundtrip fare. (These are hand-rowed rafts and are priced per raft.)

While not absolutely necessary, a good headlamp like this one can be useful as the guide’s lamp isn’t super strong. Sturdy shoes are also good to have when you visit Tham Lod as caves can often be slippery. There is also one part of the cave that requires ascending steep stairs, though the majority of the visit is relatively simple.

Most of the other caves in the region are not nearly as touristy, and it is at these spots that you can truly experience caving in Soppong.

While caving isn’t a passion of mine, I figured I might as well as explore since I was already in the area. So I signed up for a day trip that trekked through the forests of the Thai highlands, visited Karen villages, and went caving.

As the recent case of the Thai soccer team trapped in a flooded cave shows, these caves can be incredibly dangerous, so it is important to go with an experienced guide who knows the area and its caves. In addition, local rules mandate that a local villager who knows the cave you’re visiting accompany you. 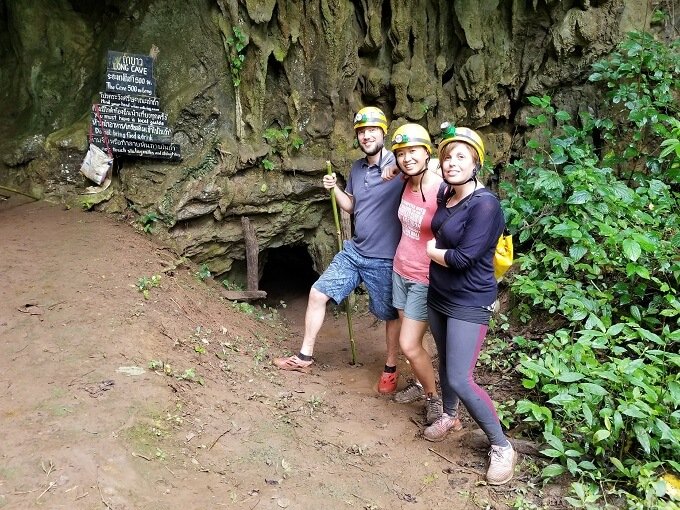 The cave we visited was called Long Cave. To get into the cave, we had to seriously get down and dirty to crawl through the very short opening. The opening was also rather narrow, and it certainly didn’t help that the cave walls were covered with spiders. Let’s just say that’s one part of caving I’m not so fond of.

The 500-meter long cave was vast and seemingly neverending. During my funemployment trip, I probably went to a dozen or so caves in various countries, and this one was definitely the most natural and untouched by humans.

Of course, to exit the cave, we had to leave via the same opening we came through. It had rained the night before, and though I’d managed to enter without falling, I slipped palm first on my way out and consequently splattered mud all over our guide. Good thing he was good-humored about it!

Next, we visited a Karen village to see their handmade textiles, and then we trekked through rivers (literally walking through rivers) as we walked back toward town. For me, one cave a day was plenty enough, but for those more fascinated, there are endless opportunities to explore.

How to get to Soppong

Soppong is located in between Mae Hong Son, the province’s provincial seat of the same name, and Pai. If you have a motorbike or car, you can certainly take those options. But if not, you can take a Prempracha van from either town to Soppong (also ticketed as Pang Mapha, the name of the district it’s in). You can also start your Prempracha trip from Chiang Mai. Alternatively, you can take one of the yellow songthaews that locals take from either Pai or Mae Hong Son. For the songthaews, I’d check with a local to find out the times as there are no online timetables and schedules can change. 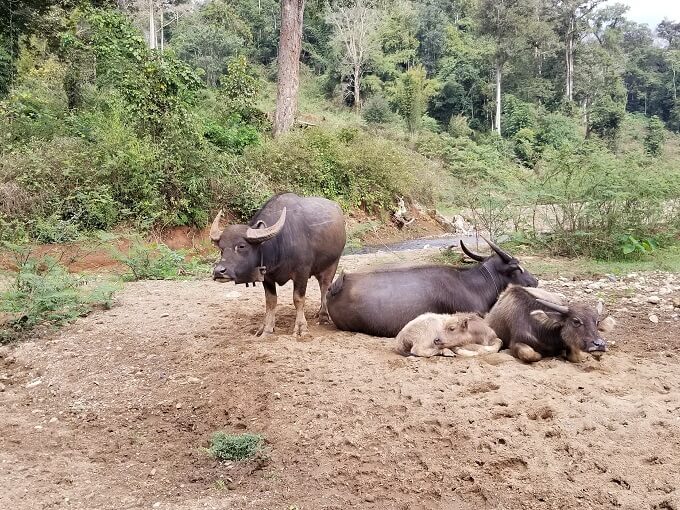 Where to stay in Soppong

Because it is not a heavily traveled area, Soppong has rather limited lodging options. In town, there is Little Eden Guesthouse and Soppong River Inn. Just outside of town is Cave Lodge.

Because of the limited supply, lodging is not as cheap in Soppong as you might expect. I chose the Cave Lodge because it is the only option with a dorm, and even that was 180 baht a night. (The dorm is two huge platforms with multiple spots with bedding and padding. Thankfully each spot had its own mosquito nest!)

The Cave Lodge was also a more reasonable option because it is right next to Tham Lot cave (you cross a field to get to and from each place). It also offers a variety of tours for exploring the area, which is a solid idea in this region even for a DIYer like myself.

And the place is known to be the cave experts in the area. Its owner, an Aussie named John Spies, has spent decades studying and uncovering caves in the region. Guests staying at the other spots will often go to the Cave Lodge to participate in its tours as well. Plus, there is an on-site kitchen, so no need to worry about where to get food. (The prices do reflect the convenience, however.)

Other things to do in Soppong

Caving is the main activity in Soppong, and you could spend weeks upon weeks exploring the area’s mysteries. Hell, John at Cave Lodge has been doing it for more than 30 years.

There are also lots of opportunities to go trekking and explore Thailand’s wilderness or spend time with the people of local hill tribes. When the river is high, you can also explore the area via kayak.

And if you’re lucky enough to be in Soppong on a Tuesday morning, you can also witness the local traveling market. This rotating morning market travels to each of Mae Hong Son province’s 7 districts on designated days of the week (Soppong is Tuesdays, Pai is Wednesdays, Mae Hong Son is Sundays), and it’s a wonderful opportunity to see how the local economy works. 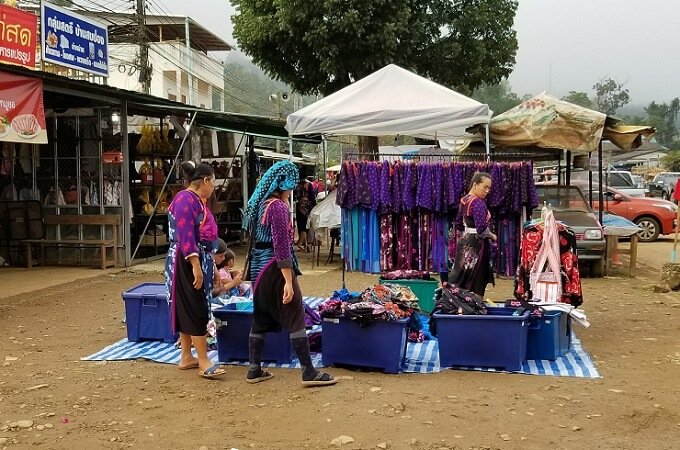 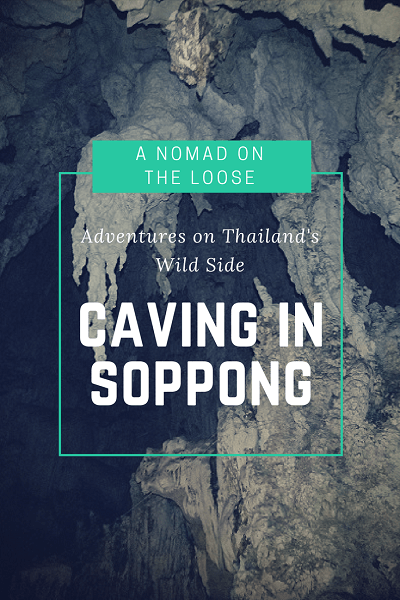