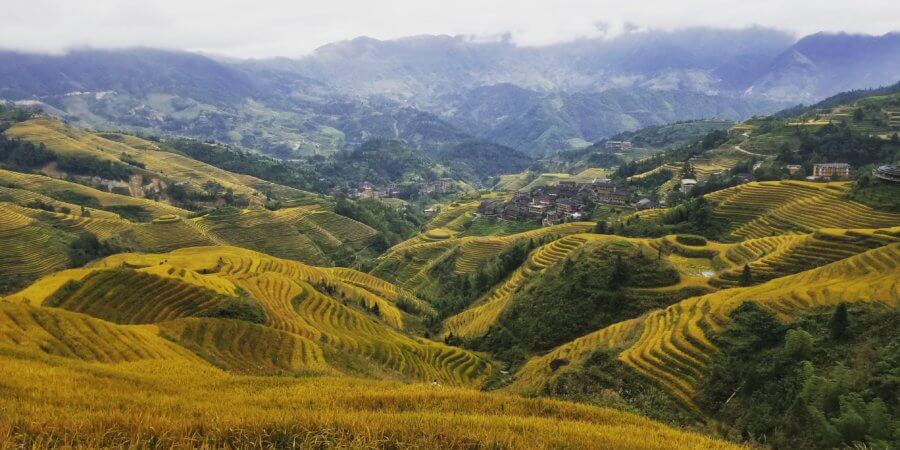 After spending roughly a week in northeastern China in September and then roadtripping through northwestern China in October, I turned my sights south, specifically to the south central autonomous region of Guangxi and the southwestern province of Guizhou. For me, the largest draw for Guangxi was initially Guilin. I had long heard of the beauty of Guilin, its rivers, and its karst formations. But having visited, I now have a different recommendation for Guangxi: skip Guilin and spend your time in Yangshou and the Longsheng Longji Rice Terraces.

Why I Didn’t Love Guilin

I suppose in some ways this was an issue of uninformed expectations. I knew Guilin had flowing rivers and gorgeous karst formations. I just didn’t realize that it didn’t have much else, nor that Yangshuo had the same plus more. In addition, Guilin is a much bigger city, with few attractions in city proper.

The main point of interest within the city of Guilin is Elephant Trunk Hill.

Shaped like an elephant extending its trunk into the water for a drink, the limestone karst hill is a symbol of Guilin. While beautiful and fun to see – it certainly looks more like its name than many other stone and cave formations I’ve seen in my travels – I’m not so sure it’s worth the hype. Tickets are ¥70, or roughly $11 USD, for basically a photo op.

That said, most people do enter the Guangxi autonomous region via Guilin, so if you have a couple of hours to spare and want to see the famous landmark, go for it. You can save some money by buying your ticket from a nearby travel agency. We got ours for ¥45 from a CTrip office just outside entrance #2. (CTrip is one of the bigger players in China’s travel sector, much like Expedia in the States.)

After your visit, make sure to swing by the Sun and Moon Twin Pagodas. Gorgeous pagodas on a lake, and it’s free to look! You can also pay to enter the pagodas if you’d like, but we didn’t feel the urge to do so.

Why Yangshuo is a Better Base for Cruising the Li River

The famous Li River flows from Guilin to Yangshuo, thus making it possible to embark on a trip on the river from either city.

The most famous sights along the Li River are closer to Yangshuo, however. Plus, the smaller city has a wider variety of other beautiful outdoors scenic spots to hit up, and it’s not as congested as Guilin.

Here’s a suggested Yangshuo itinerary should you take my suggestion and go there instead.

Why You Must Go to the Longji Rice Terraces

I’ve seen rice paddies and terraces elsewhere in Asia, but nothing compared with the beauty of the Longji Rice Terraces. To go to Guangxi and skip these rice terraces would be a loss.

These 600+ year-old terraces are still very much in use and feed the local Yao and Zhuang communities; we’re just lucky we get to enjoy their beauty. Guesthouses are available throughout the various rice terraces, and while accommodations are very basic, I would absolutely recommend spending a night in the peaceful terraces, surrounded by nothing but rice.

We were incredibly lucky as we had arrived in Guangxi on harvest day and were told we were too late to see Longji in its autumnal beauty.

But as it turned out, the 2017 harvest had been delayed, and when we arrived in Longsheng a couple of days later, it was the last day before harvest began. It’s quite risky to time your visit this way, but it is incredible to see the Longji Rice Terraces both before harvest and after, when it takes on a decidedly new character.

To get there, you can take buses from Guilin or Yangshuo. (From Yangshuo it was ¥90 and just under 4 hours to get to the entrance area. From Guilin it was ¥50 and about 2 hours.)

Tickets to the Longji Rice Terraces are ¥95 and are valid for two consecutive days.

The two main terraced areas are the Ping’an Terraced Fields and the Jinkeng Terraced Fields. The former is home to folks of the Zhuang minority and is more crowded and more commercial as it’s more accessible.

Jinkeng, on the other hand, is less visited and retains more authenticity. It’s slightly less accessible, however, and requires a bit time and either a cable car ride or a sturdy set of legs to take you up the hills. The Red Yao live here, and should you need a hand with your luggage, their women are happy to be your porter, typically for a fee of ¥60 or so.

We chose Jinkeng as it’s less commercial and because it’s home to the highest point of the Longji Rice Terraces. The viewpoint is called West Hill Music, and it’s nearly 4,000 feet high. We had to go up there as our hotel was up there, but you should anyways as it’s the absolutely most gorgeous viewpoint.

There are multiple other viewpoints in the Jinkeng Terraced Fields, and you can also hike from there to the Ping’an Terraced Fields. Signage isn’t wonderful though, so I’d suggest having either an offline translator or a guide if you don’t speak any Chinese. You’ll almost necessarily have to ask for directions at some point, even if you can read Chinese. Don’t be afraid to ask for help though, the locals are plenty friendly.

The Longji Rice Terraces are supposed to be gorgeous in the spring and summer as well, though I’m partial to those autumnal amber waves of grain (I know, I know, this is rice, not wheat). Winter, I’d skip, as it was already cold enough at night in October, but I’d absolutely return and visit again in the spring or summer.

What I realize now is that when people spoke of Guilin, they really meant Guilin-Yangshuo-Longsheng as a whole. Had I known, perhaps I wouldn’t have been so disappointed with Guilin proper. But then again, this trip made me fall in love with the Longji Rice Terraces.

20 thoughts on “Skip Guilin, Go to Yangshuo and Longsheng Instead”