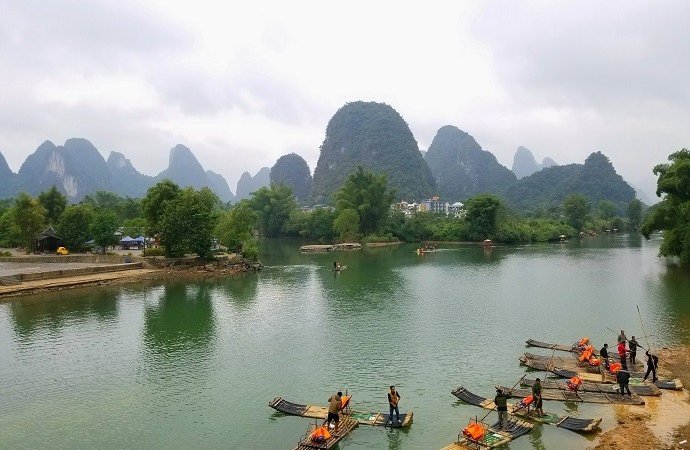 It’s completely catered to tourists, especially westerners, I was told. Great, exactly the type of place I dislike, I thought as I made my way to the southern Chinese city of Yangshuo. It turned out to be true that Yangshuo’s downtown does cater extensively to western tourists, but there’s so much more to the city than the restaurants and bars of West Street. I kept away from Yangshuo’s tourist center as much as possible and fell in love with its gorgeous surroundings and scenic bike paths. If you’re in Guangxi or Guilin, you’ve got to spend some time in Yangshuo. (For me, it’s second only to the Longji Rice Terraces.) Here’s a two-day itinerary on what to do in Yangshuo to get you started so you can explore all its natural beauty.

The rafts hold two people, cost ¥320 per raft for a full-length trip, and is hand-rowed by one of the many local oarsmen waiting in rotation. At launch, the river can feel a little crowded as there are also rafts for hire for shorter loops on the river. But once you get past the first 5-10 minutes, it becomes a peaceful and calm trip down the Yulong River.

Like its bigger cousin, the Yulong River is lined with many karst formations covered in lush greenery. The river isn’t very deep, and there are small drops along the way that your oarsman will expertly navigate without getting you wet. The drops feel a little like the Thunder Mountain roller coaster at Disney.

Trips are one-way. Your driver can pick you up at the finish, or if you biked or drove yourself, you can hitch a ride back with the raft operators.

Yangshuo is surrounded by picturesque villages that are fantastic for a peaceful walk or for a fun photo shoot. In fact, the region is dotted with ancient bridges that are popular with local couples getting engagement or weddings photos done. It’s not hard to see why, with their symmetrical architecture, lush overgrowth, and serene waterways. Here’s Fuli Bridge, one of the most famous, in the village of the same name.

Cycle Through the Scenic Ten-Mile Gallery

Rent a bicycle for your afternoon adventure for roughly ¥10 a day and ask your hotel or hostel for directions toward the Ten-Mile Gallery, known in Chinese as Shili Hualang. So named because walking or cycling down the scenic stretch of road seems like you’re inside a painting, the Ten-Mile Gallery is packed with viewpoints and natural attractions. For most foreign visitors, the north gate of the Ten-Mile Gallery Scenic Area will be the closest entrance. Follow the asphalt road and the clearly marked signs as you pass farmers working in their verdant fields and see the Yulong River from another angle at Gongnong Bridge.

The scenic area is free to visit, though all the attractions along the path require varying amounts of admission. There are butterfly springs, caves with mud swimming pools, ancient banyan trees, and more.

You can choose to exit the Ten-Mile Gallery Scenic Area via the south gate and return to Yangshuo via an alternate route or turn around and go back the way you came. There are so many minute details of beauty and wonder that this was one path I didn’t mind repeating. If you have ample time and are interested in further exploration, you can also follow the dirt and cement roads to visit local villages.

Cruise Down the Li River

No trip to the Guilin-Yangshuo area is complete without a cruise down the Li River. While actual cruise boats are available on the Li River if you’re doing the entire Guilin-to-Yangshuo route, I’d suggest a shorter rafting trip unless you have time and money to spare.

From Yangshuo, you can take minibuses to the town of Xingping where you can take a rafting trip along the most famous parts of the Li River. Like many other tourist attractions in China, the rafts here are now controlled with an official ticket, which means it’s harder to bargain than previously. Bamboo rafts are no longer available here, replaced instead by PVC pipe rafts. Each raft holds 4 people and costs ¥216. If you’re fewer than 4 but want a private trip, the vacant seats can be bought for ¥25 per seat, paid directly to the boat handler. If you want to save some money, book the night before via a travel agent in Yangshuo. We paid ¥110 per person including roundtrip transport.

By the launch dock is one of the most famous landmarks on the Li River: the karst mountains featured on the back of the ¥20 note.

Pro tip: Take this photo on the walkway before you go down to the dock. The river can get quite crowded, and once you’re on the water, it’s much harder to get a clean photo without other rafts (and thus the mandatory orange life jackets).

Another major landmark is that of the Nine Horses Fresco Hill. Some imagination required, but concentrate hard and you should see all nine horses.

Get a Workout and an Aerial View with Laozhai Mountain

Most people will go on their way after the raft trip on the Li River, but one of the best views of this famous waterway is actually on land, specifically from the summit of Laozhai Mountain in the town of Xingping. Once you disembark from the Li River raft, head over to town and ask for Laozhai Mountain. Because the mountain trails are no longer regularly maintained, there are also no clear signs pointing to it. Fortunately, as Xingping is a key launch point for the Li River, there are plenty of English-speaking tour guides who can point you in the right direction.

Be careful as you hike up Laozhai Mountain. Again, there’s no regular maintenance here (though there are plenty of signs reminding you of this) — so step carefully and steadily. A note for those with a fear of heights: near the top there’s a steep, narrow ladder you’ll need to climb to continue on. Once up top, there are fantastic views from the pavilion. Or, if you’re more daring, you can climb the last pile of rocks for a 360 view, though there are absolutely no safeguards there and folks have been known to have a hard time coming down afterward.

The bird’s eye view is absolutely worth the climb!

As much as West Street is packed with tourists, both domestic and international, it would be amiss to leave Yangshuo without checking out West Street. Go early to allow yourself some exploration time before the crowds rush in. The oldest street in Yangshuo, the ancient West Street is truly east-meets-west, modern with the ancient. You can find restaurants selling the local specialty “beer fish” next to German beer gardens, and consider buying some artisan pottery right after you get some freshly made osmanthus cake.

Take it slow on West Street and its surrounding alleys. Try some local specialties, browse the multitude of shops, and just take in the lights and the crowds as your time in Yangshuo comes to a close.

Have you been to Yangshuo? What would interest you more, Yangshuo or Longsheng?