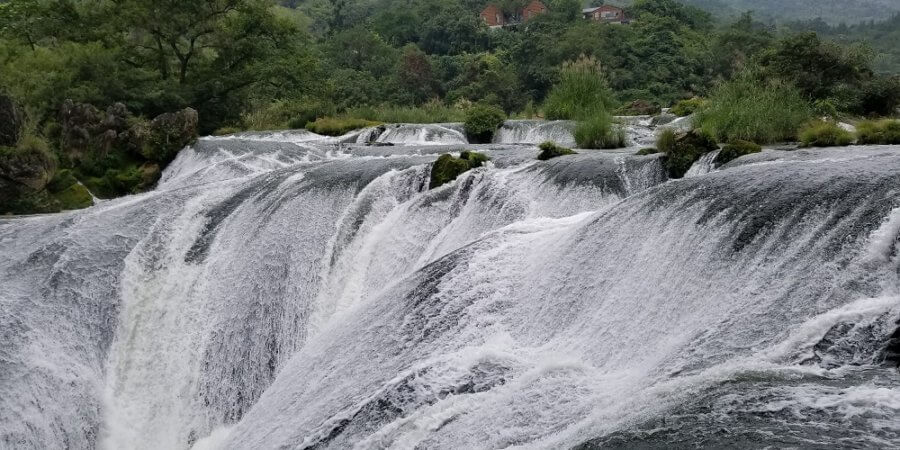 This is Huangguoshu Waterfall, the largest waterfall in Asia. 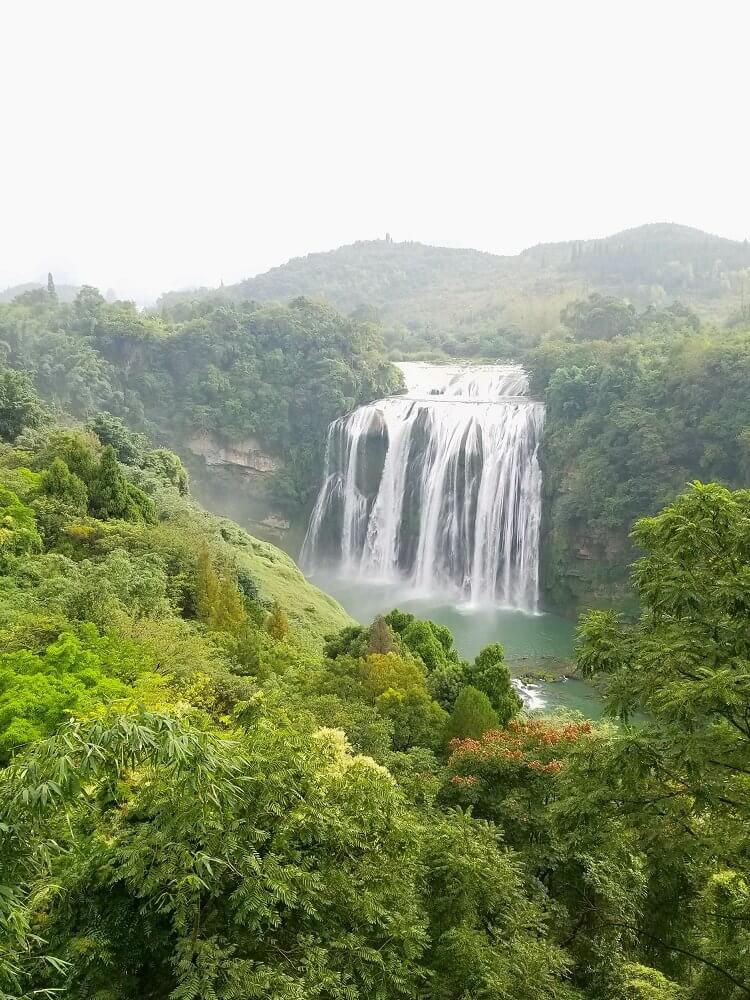 Located in the southwestern Chinese province of Guizhou, Huangguoshu (Yellow Fruit Tree) Waterfall is this poor province’s pride and joy, its key tourist attraction. To get there, you’ll first need to get to the city of Anshun, roughly 90 kilometers or an 80-minute drive from the provincial capital of Guiyang. From there, you can choose to take day tours that will shuttle you to Huangguoshu Waterfall National Park and back, or you can take a local bus for ¥23 and stay at one of a dozen or so hotels nearby. The latter is an especially good idea during low season, when a two-bed room can be secured for around ¥80. (There’s also an option to take day tours from Guiyang, if you don’t mind that you’ll spend more time on the bus than in the park.)

I was somewhat hesitant about making the trip to Huangguoshu Waterfall, especially as the entrance fee is ¥180, with another ¥50 intrapark bus fee that’s basically mandatory given the size of the park. The key to making it worth your time and money is to budget at least 3-4 hours for the park so you can really explore it properly. For me, the best part wasn’t the Huangguoshu Waterfall itself, but discoveries elsewhere in the park.

My first stop was the Douputang Waterfall, known as the widest of the waterfalls in the park. I’m told that during high season it can take an hour to just visit this one spot given how crowded the pathways get.

From there you’re typically directed to get back on the intrapark bus to get to the grand waterfall, but walking the 500 or so meters on the footpath will provide views that most visitors miss.

A small pavilion here, a honorary statue there, the roar of the water thundering down the slope as I approached the grand Huangguoshu Waterfall. 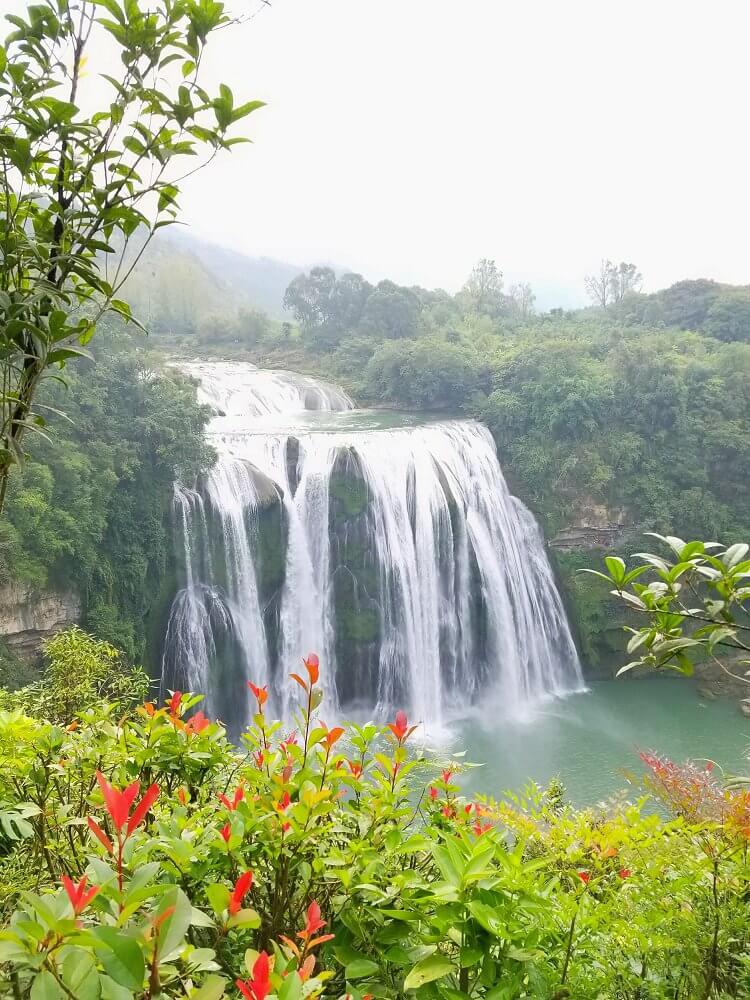 Just before I made my way down to see the waterfall closer, I saw what surprised me the most in the park: a Catholic church. While historic Catholic churches exist throughout China despite the country’s current policies, I was still fascinated.

I crossed the street to see if there was any explanation, and finding none, ventured inside the courtyard to find someone to ask. The church is here because those who lived here built it long before the area became a formal tourist attraction, said the man I found. And yes it is, he replied, when I asked if it’s still in use. 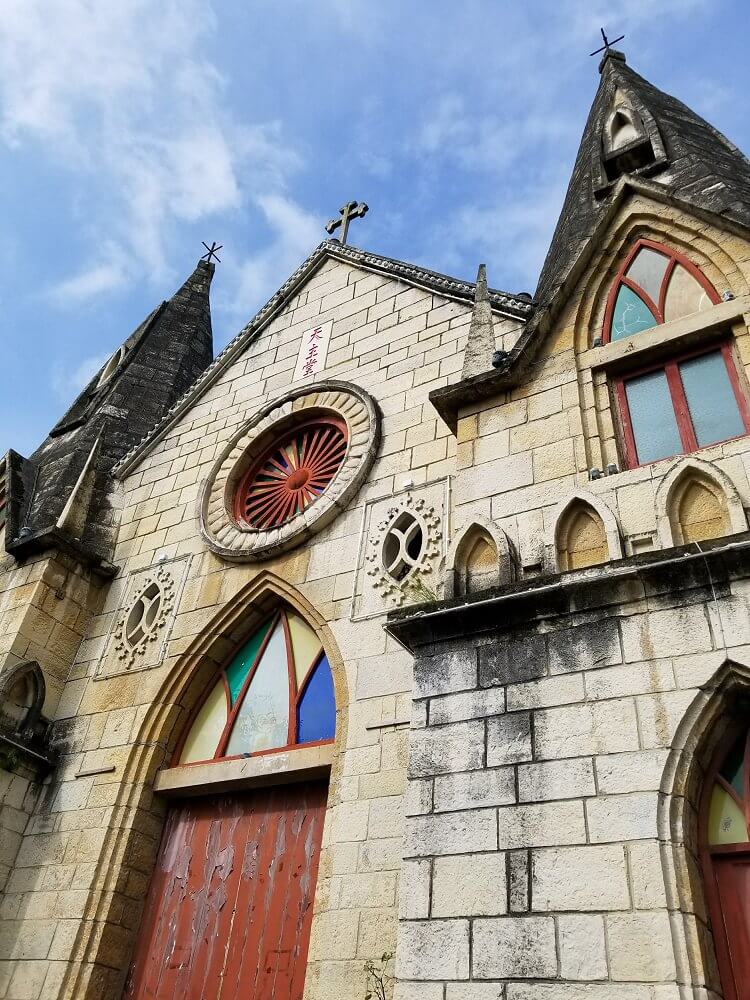 Not wanting to overstay my welcome considering I’d pulled him away from his TV show, I bid him adieu and went down the pathway to see Huangguoshu Waterfall from the main viewpoints. (Side note: before you enter the park, there will be folks all around town trying to sell you ponchos, telling you they’re necessary at the grand waterfall. They’re not. There is indeed a refreshing mist coming off of the waterfall, but you’ll likely welcome it instead of wanting to repel it, especially in the warmer months.)

I’ve never been to Niagara Falls, but I’ve been to many a waterfall in my travels, and in some ways, I was a little disappointed when I saw Huangguoshu Waterfall. Was it large? Yes. But it seemed to lack the force and power that embodies other famous waterfalls around the world. Perhaps a visit during rainy season would have proved it more true to its title as the largest waterfall in Asia. I am also told that there’s a dam controlling the water flow, so perhaps my disappointment was man-made, a human assault on nature’s true power.

The third main attraction area in the park is known as Tianxingqiao, or Heavenly Star Bridge. Many tourists skip this scenic area due to a lack of time, but it was here that I found the most beautiful parts of Huangguoshu Waterfall National Park.

There were large caves, ancient trees, serene ponds, stone formations, and more waterfalls. These were probably my favorite spots in the park. (It also helped that there were way fewer people in this area.) 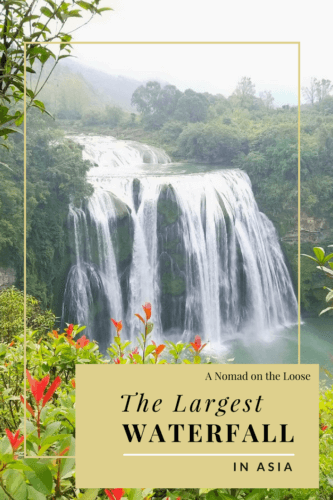 13 thoughts on “This is the Largest Waterfall in Asia”