I don’t know when I first heard of the Longhorn Miao. I just know that once I learned of the ethnic minority, it was hard to forget their distinctive headdresses.

But I didn’t know much more about the Longhorn Miao, other than that they lived in southwestern China like so many of China’s other ethnic minorities. So when a chance encounter in the Xiaohuang Dong village provided me with the general directions to reach one of the Longhorn Miao villages, I had a hard time resisting.

Getting to a Longhorn Miao village

Getting to one of the 12 Longhorn Miao villages is a journey. As one of China’s poorest and most mountainous provinces, public transport in Guizhou is light years away from the high-speed railways that power the metropolitan cities on the eastern seaboard.

The train system can take you to Guiyang, the capital of Guizhou; Anshun, where Asia’s largest waterfall is; and as far as Liuzhi, the closest train station en route to Longga, the Longhorn Miao village we chose to visit.

We took a bus from Anshun to Liuzhi and then hopped onto a minivan to get to the town of Suoga. It’s a bumpy road of questionable quality, perpetually pothole-ridden thanks to the large semis carrying coal out of a nearby plant.

By the time we arrived, it was pitch dark. We asked the minivan driver to find us a place with a room and food. No doubt we overpaid a ridiculous amount for the drab room with rock hard beds and barely functioning indoor plumbing, but you learn to think of it as a contribution to the local community, where most people live in such conditions.

A visit with a Longhorn Miao family

The next morning we arranged for a motorbike to take us up the bumpy hills to Longga village, where our driver was nice enough to chat with a few locals and match us with a family who was open to a visit.

Mrs. Xiong and her mother-in-law Mrs. Wang welcomed us with open arms into their small concrete house as men from the community laid brick outside. They are among the 700 people who live in Longga village. The entire Longhorn Miao population is approximately 6000.

Mrs. Xiong and Mrs. Wang were incredibly friendly and excited to show us their famous headdresses. As Mrs. Xiong brought the various pieces of their traditional costume into the room, Mrs. Wang showed us a roll of hand-woven hemp fabric, the result of a year’s worth of work. It’s the first step to the creation of the gorgeous batik pieces of clothing we saw next.

The women of the Longhorn Miao traditionally embroider the hemp fabric and then use a wax paraffin dying technique to further decorate the clothing, two more steps that can take months of work. These intricate pieces of clothing are worn by men and women alike.

Each headdress consists of a wooden horn with an embedded comb and the hairpiece. Each hairpiece weighs approximately 3 kilograms and is made of ancestral hair and thread. These are hairs that fall as the women of a family brush their hair, passed on from mother to daughter. Mrs. Xiong’s hairpiece consists of her own hair as well as that of her mother’s and her grandmother’s. She has no daughters though, so she has stopped collecting fallen hair as she has no one to pass it onto. 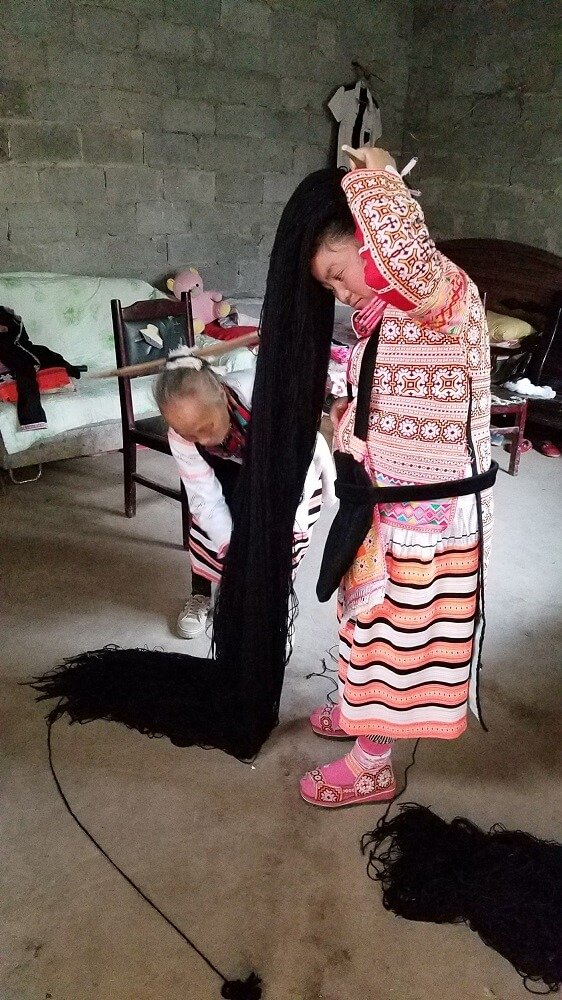 Soon Mrs. Wang has brought out the pieces of her traditional outfit as well. The two put on their clothing first before starting to put on their headdresses.

Not unsurprisingly, it’s a complicated process. And it’s fascinating to watch as they secure the wooden horned comb to their heads and start to maneuver the extremely long hairpiece around that comb. 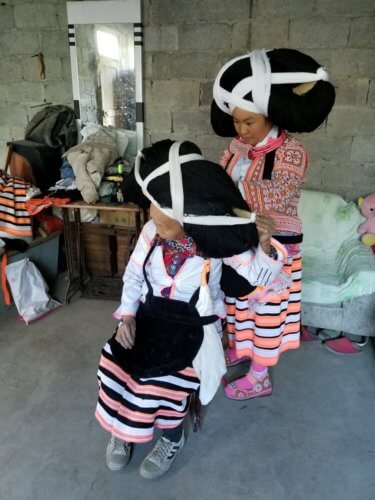 They’re not as adept at it as they used to be because they no longer wear it every day, the women tell us as they start to help each other with their headdresses.

Mrs. Wang, who is in her late 60s, says that when she was little, she wore the headdress every day, even when working in the fields. And she had to be quick at it because she had to put on her headdress each morning before she went to fetch water over by the mountain, something that had to be done before the menfolk woke up and needed their washing water and breakfast.

Headdresses secured with a final wrap of the white cloth band, Mrs. Xiong and Mrs. Wang proudly showed off their heritage.

A moment as an honorary Longhorn Miao

Then they turned to me.

They had already asked when we first arrived whether I wanted to try on the traditional costume. I was hesitant about it, especially given the headdresses consist of ancestral hair. But now both of the women turned their attention to me and continued to insist that I had traveled so far to get to them and should absolutely try it on.

After some additional prodding, I finally said yes and both of them excitedly got to work removing Mrs. Xiong’s costume and putting it on me. I think they were joyous to do so in part because there are no females in their next generation, so it’s been a long time since either woman has helped a younger sister or daughter put on the headdress. 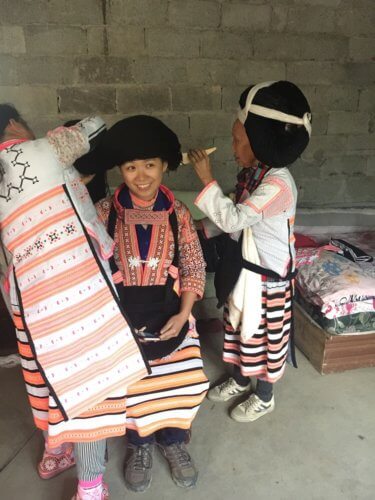 Let me just say, putting on that wooden horned comb hurts. The comb has to be ever so tightly inserted into your hair to stay secure. And the hairpiece was heavy, too. I’m sure my neck muscles would get so much stronger if I had to wear this headdress all day every day, including when bending over to work or clean, or even just to read.

It was a delight to hear and learn about their lives as they finished up.

How despite their poverty, they’ve been able to travel to various places in China, having been asked to showcase their traditional costumes and headdresses. Members of the community have even been part of the star-studded annual Chinese New Year’s Gala.

How during weddings, funerals, and Chinese New Year, everyone from all 12 Longhorn Miao villages convenes in Longga for massive celebrations. Those are the times when everyone is decked out in their finest traditional clothes.

And then it was time for my photo shoot. (There are now many photos of me on their phones as well.) The headdress looked as it should, but the fit was a bit funky with the clothes given my towering height over them. Everything was a little short and a little tight. We didn’t even try with the shoes, ha.

Our initial curiosities filled, Mrs. Xiong accompanied us down a small hill to the village center.

One reason we had chosen Longga village is because it’s home to the Longhorn Miao Ecomuseum. A result of a collaboration between the Chinese government and the Norwegian crown, the ecomuseum is China’s first and opened in 1998.

A key reason I was more excited to visit the Longhorn Miao than the more commercialized Basha Miao was due to my continuous debate of the benefits and disadvantages of cultural tourism.

And so it was comforting to see the governing principles displayed in the ecomuseum.

The first principle is as follows: “The people of the villages are the true owners of the culture. They have the right to interpret and validate it themselves.” The fourth principle says: “When there is a conflict between tourism and preservation of culture, the latter must be given priority. The genuine heritage should not be sold out, but production of quality souvenirs based on traditional crafts should be encouraged.”

Here we learned that men too traditionally have headdresses, but now few ever wear them. We saw traditional looms for weaving, other ethnic artifacts, and even a photo of Mrs. Xiong when she was a teenager.

We also learned that it is possible to call the museum manager, a non-Longhorn Miao man, and stay in one of the accommodations at the museum. The downside is there are no food options, though as long as you’re not picky, it’s very likely the friendly villagers would happily cook you a meal with what they have. 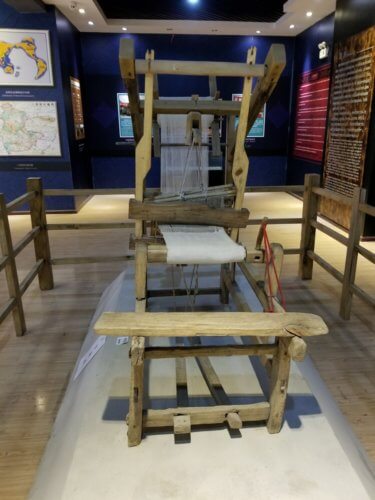 Because that’s exactly what happened to us. After the museum, Mrs. Xiong insisted that we stay for lunch.

Anyone who’s ever had a rural meal that’s farm-to-table in the truest sense knows how delicious of an experience it is without even having to taste the food. The pork was from a pig they raised and slaughtered themselves, the eggs from the hen that had been clucking in the yard, the veggies harvested from their fields. And I had steamed white cornmeal for the first time in my life.

We were not allowed to stop eating and our bowls kept on being refilled with more food. Finally, we had to stop, and Mrs. Xiong put together a bag of homegrown walnuts for us to take on the road.

A phone call was placed to our motorbike taxi driver so he could come pick us up. We paid him ¥20 each way (for two people), an amount that seems so little but is actually twice what it should be, we were later told.

Before we left, we thanked Mrs. Xiong and Mrs. Wang profusely and stopped by to bid our goodbyes to Mrs. Xiong’s husband as well. Though no one ever raised the question of money to us, it felt appropriate to give them a donation for their time and food. In a poverty-stricken place like this, every yuan counted. We also exchanged WeChat info with each other so I could send over photos I’d taken of them.

Despite having only spent approximately 5 hours in Longga village, we had been so warmly welcomed that I had a hard time leaving. It’s a place that I hope to visit again one day. In the meantime, I hope that more prosperity reaches the Longhorn Miao so their lives can improve and they can continue to preserve their cultural heritage.

Thanks for reading! Please share it by pinning it or clicking on one of the other social sharing buttons. 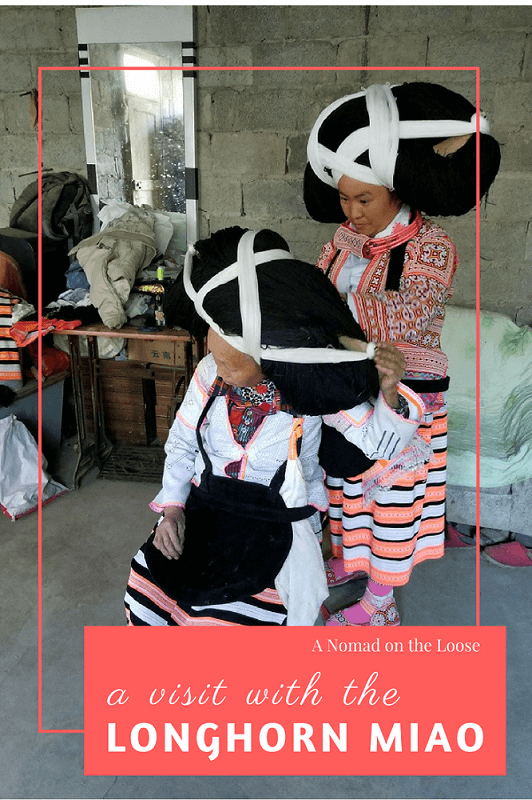 15 thoughts on “A Visit with the Longhorn Miao”