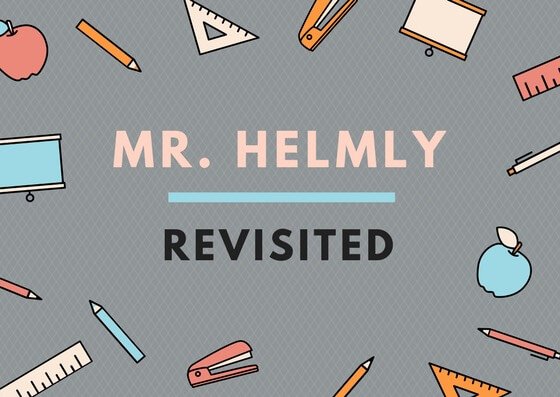 It’s funny, isn’t it, how the way we view people and things change so much between the time we’re kids and when we’re adults? Or even year to year? How the way we remember people and events change along the way?

Well, at least most people and things in life are like that. But not Mr. Helmly. For those of you who remember, Mr. Helmly was my 3rd- and 4th-grade teacher who had a profound influence on my life. [Catch up on Part 1 and Part 2 of this story.]

Earlier this month, after more than 11 years since I last saw him and nearly 3 years after I began to look for him, I finally met up with Mr. Helmly again while I was visiting the city in which he now lives. The restaurant could have been packed to the core and I still would’ve been able to pick him out in a hot second. Take a look.

(For the sake of the story, I’m posting this time capsule from the ’90s, with a special appearance from the friendly classroom skeleton. No comments on my fashion choices please.)

Can we also talk about how he absolutely does not look like a man who’s going to turn 72 this year?

Besides the fact that I’m now taller than him, Mr. Helmly is really how I remembered him, still with that personality of not conforming to the norm. I did, however, misremember certain facts about him. For example, he was not a lifelong bachelor as I had always remembered, but rather had been single for the many years when he was teaching at my elementary school. (He is now remarried, however, so send him your best wishes).

I wanted to update those who were keeping up with this, but for his privacy and mine, this post is intentionally kept short. For those who are still looking to get in touch with him, please leave me your info in the comments or message me via my contact form — Mr. Helmly has said he’s happy to correspond with any former students.

Mr. Helmly and I continue to be in contact every couple of months and I’m happy to say he’s still actively traveling. If you need a Philippines expert, he’s your man!