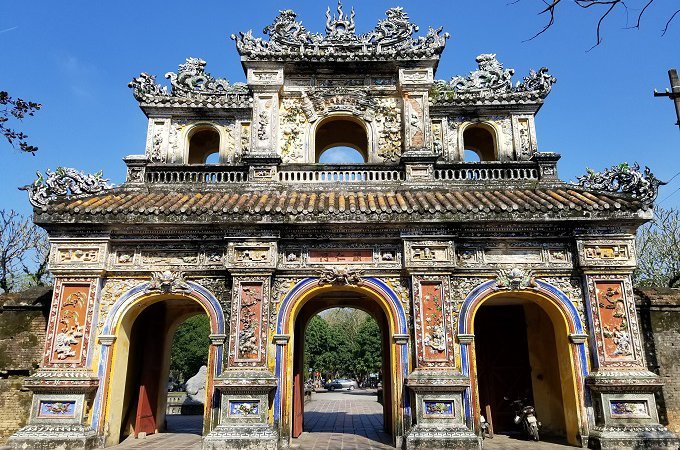 Nothing was as I expected in Hue.

My face stung as the bike sped up and the wind whipped the rain onto my face. I fervently wished the helmet I was wearing had a visor.

Once my face got used to the sting, I realized that there were way more people in Hue than I had expected. I don’t know why, but somehow the ancient capital of Vietnam had warped in my head into a city where time stood still.

A place that was still the imperial city it once was.

But of course, it is not.

In recent history, Hue makes its mark as the site of multiple deadly battles throughout decades of war. The city was devastatingly destroyed during the Anti-French Resistance War (First Indochina War) and then again during the Vietnam War (Second Indochina War).

Thanks to continued restoration, however, Hue’s main allure today is the remnants and reconstructions of the imperial majesty that once was.

It’s not Ho Chi Minh or Hanoi, or even Hoi An or Ha Long Bay. But Hue is an absolute must-visit for visitors to Vietnam, its charm and intrigue tied to the nostalgia and history it holds.

Here’s how to spend 48 hours in Hue experiencing that charm and intrigue.

When I first heard of Hue’s Forbidden Purple City, I imagined something akin to its cousin, the Forbidden City in Beijing.

In some ways, it’s similar.

It was the home to Vietnam’s rulers, the emperors of the Nguyen dynasty. It had government courts, temples of worship, gardens, pavilions, and the residences of the imperial family. And as with many citadels all around the world, the complex is enclosed by walls.

But as you get closer, the decay hits you right in the face.

There’s something eerily haunting about an imperial palace in ruins.

You can spend hours within the walls of the citadel exploring the halls and nooks of the complex. The destruction that multiple wars have brought upon the buildings and grounds are everywhere around you. Even some of the outdoor signs meant for tourists are so eroded that they’re impossible to read.

It’s at once a look at Vietnam’s imperial history as well as a walk of remembrance, a chance to contemplate the legacies of western colonialism.

The citadel, which includes the Imperial City, the Forbidden Purple City, and other royal buildings, is part of the historical monuments that make up the city’s UNESCO World Heritage Site. Together, they are formally known as the Complex of Hue Monuments.

If you’re planning on visiting other major Hue sites, however, a combination ticket may be a better fit. The most popular package includes entrance to the citadel plus three imperial tombs for 360,000 VND; the ticket is valid for 48 hours.

There’s also technically a dress code for the palaces inside the imperial city, but I saw the staff letting in people who were wearing shorts and mini skirts anyways. I always prefer to recognize the dignity of the places I visit though, so I’d suggest leaning toward modesty.

Lastly, if you have the time, make sure to explore the peripherals of the citadel as well. There are various prayer halls, residences, and museums that are easy to miss if you simply go down the main path.

Like the pharaohs of Egypt and their pyramids, the Qin Shi Huang emperor and his Terracotta Warriors, and many other rulers who have come since have shown us, often you can learn just as much about a culture through their dead as through their living.

The imperial tombs of Hue are no different. And for me, they were perhaps the most fascinating places to visit in Hue.

Armed with new knowledge and the combo ticket from my visit to the Imperial City, I started my trek through the royal tombs of Hue with the Minh Mang Tomb.

Located in a village in the outskirts of the greater Hue area, it is the burial site of the second ruler of Vietnam’s Nguyen Dynasty.

Minh Mang Tomb is a sprawling complex with multiple gates, buildings, gardens, and lakes. An orthodox Confucian, Emperor Minh Mang was an early opponent to the French. And his burial complex very much reflects the values he held.

It can take a good minute to walk from the entrance of the complex to the tomb itself. Ironically, though, you can’t actually see the tomb as it’s hidden behind a walled enclosure.

Either on your way in or on your way out, make sure to stop by the small exhibit just past the funeral stele (near the entrance). There’s a fascinating account of the history of Nguyen dynasty succession and how the French manipulated it for their colonial gains, and it’ll help you navigate through the other royal tombs in the vicinity.

Next, I headed to the Tomb of Khai Dinh.

Oft-called a mini Vietnamese Versailles, Emperor Khai Dinh’s tomb showcases both his personal tastes and his close collaboration with the French, for which he was highly disliked by his people.

The tomb is, perhaps, as dramatically different from Minh Mang’s tomb as Khai Dinh’s Francophile ways were from the Confucian beliefs of his relative who had died 84 years before him.

Built mostly out of concrete and wrought iron, Khai Dinh’s tomb is a much more compact complex than Minh Mang’s tomb. But it is also much more opulent.

And to wrap up my selective tour of the Hue royal tombs, I headed to the tomb of a ruler who reigned in between Minh Mang and Khai Dinh: the fourth Nguyen emperor, Tu Duc.

Known as the most impressive of the royal tombs, the Tomb of Tu Duc is more like a vacation residence than a tomb complex. It’s full of quaint walkways, lakes, and residential and religious buildings.

Fitting, perhaps, considering Emperor Tu Duc lived at the complex for much of his reign but was never buried there.

Instead, it’s his main wife and his adopted son (and successor) who are buried at this complex. The true burial location of Emperor Tu Duc has actually never been found, as he had (pre-)ordered that everyone involved in his burial should be beheaded afterwards.

There are more royal tombs in the Hue area, but for me, visiting three tombs in one day was more than enough, especially on a dreary winter day.

Perhaps it was also because I was visiting all the tombs on my own, sans scooter.

A quick word of warning if you’re DIY’ing the tombs as I did: the tombs are located all around the outskirts of Hue, so be prepared for alternative transportation options.

It’s simple to get a Grab car or Grab bike from town to any of the tombs, but it gets much harder to get rides between the tombs and from the tombs back to town.

If you’re going to DIY it, you should be willing to do a lot of walking, wait long periods of time for potential rides, and pay premiums on any vehicle available to give you a lift. If that doesn’t sound like your thing, rent a scooter or bicycle or hire a driver for the day, or join one of these tours.

3) Chow down on bun bo Hue and other Hue dishes

In between all the death and decay, history and nostalgia, I had to feed my body and my soul.

And I’m a firm believer that you can’t leave Hue without having the specialty named after the city.

A cousin of the more popular pho, bun bo Hue is a rice vermicelli soup dish that originated from this former imperial city.

It’s a bit of an acquired taste for those unfamiliar with its protein inclusions. While “bo” means beef, bun bo Hue often has more than just slices of beef. It commonly includes things like beef shank, oxtail, and congealed pig blood.

While you’re in the city, make sure to also try some other local specialties, such as:

Personally, I liked the banh beo and banh khoai, was ambivalent about the com hen, and did not enjoy banh bot loc. These dishes were all ones that I’d never heard of before visiting Hue though, so I’m glad I tried all of them even though I didn’t love all of them.

Has the allure of Hue drawn you in yet? Pin it to share it with the world!