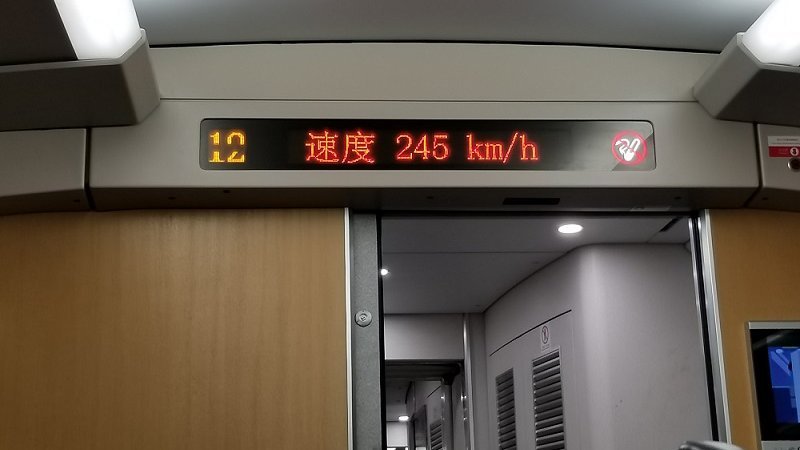 One of my most poignant observations when I was in China in spring 2012 was how the state of the Chinese rail system reflected the country’s growing wealth gap. As I rode a variety of trains in China between September and November 2017, this disparity only became clearer. There are extremely old trains that rattle and clink and stop at every crossing, and there are bullet trains that are part of the world’s longest high-speed rail system. Whatever the disparities, China’s rail system makes it much easier to independently travel the country. Here’s your guide to trains in China, from the old-school to the high-speed.

Types of trains in China

These days there are two major categories of trains in China: the high-speed bullet trains and the regular non-bullet trains.

The bullet trains start with the letters C, D, and G, are typically white or grey, and have that bullet-like head. They run up to 250 to 350 kilometers per hour, which is the equivalent of 155 to 217 miles per hour.

For our northwestern China trip, we were able to get from Beijing to Lanzhou in less than 9 hours on the bullet train (that’s like going from New York to Jacksonville, Fla. or from Los Angeles to Portland, Ore.) Let’s just say they make our Amtrak trains in the U.S. look like ancient prototypes. The trains are much newer and cleaner, smoking is not allowed, and there are sitting toilets. 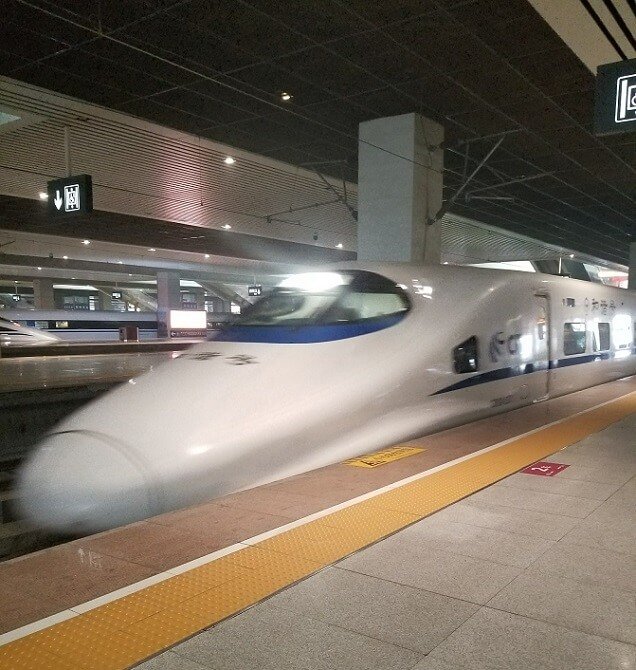 The non-bullet ones are labeled with Z, T, K, Y, and S and sometimes without letters. Most tend to be green or blue, though some are red as well. Prices tend to be significantly lower for these trains, especially on longer routes, and this is reflected in both the amount of time the journey takes and the facilities onboard. 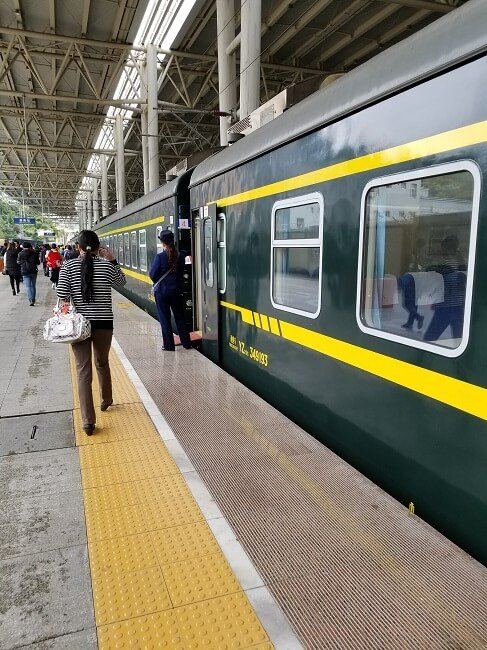 On these trains, you can see more wear and tear in the facilities, there tends to be only squat toilets, and there are many more smokers who wander out of the restricted smoking areas. (The regular trains tend to have longer stops at stations, and some smokers will smoke on the platform to avoid missing the train, causing smoke to permeate throughout the car. This is much better than in the decades past though, when passengers would blatantly smoke inside the train cars despite no smoking signs. Let’s just say I’ve had many a confrontation given my sensitivity to cigarette smoke, especially in enclosed spaces.)

The most interesting thing I noticed on this trip to China was that many of the normal trains now have live Home Shopping Network-like ads whereby train employees do live demos and sales. I witnessed ads for a Shamwow-like towel and special reading glasses.

How to book train tickets in China

The cheapest tickets on the bullet trains are the second class tickets, which are honestly still nicer than economy class seats on any American airline. First class is the next level up, followed by business and VIP class seats, though not every train has every class of seats. There aren’t that many sleeper bullet trains, but the few routes that exist have soft sleeper compartments with four bunks and deluxe soft sleeper compartments with two beds. Only two trains running between Beijing and Shanghai apparently have the new high-speed sleeper compartments right now (I have not seen these in person).

On the normal trains, there are hard seats, soft seats, hard sleepers, and soft sleepers (cheapest to most expensive). Soft seats are the nicer of the seated options, while hard seats are the cheapest and least comfortable of all. The hard seat train cars can be extremely noisy, smelly, and crowded, especially because they also allow ticketed, non-seat passengers.

That’s right, there will be folks standing the whole way and taking a breather whenever someone gets out of their seat for something. In 2012, I was traveling through rural Manchuria for 11 hours in one of these hard seat cars, and it became nauseating with the stop-and-go nature of the train and because of all the smokers not following the rules. But at least I had a seat. There were people standing for hours on end, but it was all these folks could afford (remember what I said about trains in China symbolically reflecting the growing wealth gap in China?).

You can buy tickets at all the train stations in China and you’ll need either your Chinese ID if you’re a citizen or your passport if you’re not. To skip the trip to the station, however, you can buy your tickets online. The most convenient option for foreigners (though it works for Chinese citizens as well) is CTrip (recently rebranded as Trip.com), and it’s absolutely worth the transaction fee they charge. Just have your passport number, birth date, full name, and credit card ready and you can book your train tickets with a few clicks. You can then pick up your tickets at the station by presenting your passport at the pickup window.

If you do have a second-generation Chinese ID, you can also buy tickets at the kiosks available at train stations as well as at various transportation hubs around each city. They accept cash, Chinese credit cards, and mobile payments like Alipay. Chinese ID holders can also pick up their online-purchased tickets at these kiosks by scanning their ID cards.

Safety on trains in China

In general, China is a safe country to travel in, including as a solo female traveler. High rates of violent crime are typically isolated to certain areas in the frontier regions, and the bulk of the crime visitors face comes in the forms of pickpocketing and scams. Take precautions as you would anywhere by keeping an eye on your surroundings and your belongings and by avoiding isolated areas.

The same applies on trains, where the bulk of the crime is luggage theft and pickpocketing. Both tend to be more common on the more crowded regular trains that stop more often, but they can occur on bullet trains as well. On both the bullet and the regular trains, there’s space overhead to put your bags as well as luggage areas at the head of each train car. Whenever possible, I’d try to keep your luggage overhead and your personal belongings in your lap or by your feet. If you’re traveling alone, make sure to take your personal item with you whenever you get up to go to the bathroom or leave your seat for any reason. The size of the overhead area depends on the train. I’ve been able to fit items as large as the biggest allowed checked baggage (62 in), but on some trains the overhead areas can only hold carry-on sized bags. If you need to put your stuff in the luggage areas, try to put them toward the back where they’re harder to access, and get up a few times during your journey to make sure they’re still there.

Lastly, make sure to keep an eye on the stops so you don’t miss your destination! Bullet train stops especially are short and sweet, so know your estimated time of arrival and set an alarm for 15 minutes before so you’re ready to go.

While train stations in the U.S. basically have no security (Europe’s was also pretty lax the last time I took a train there), train travel is so prominent in China that train station security in the country is much like airport security elsewhere. In many cases, you’ll need to show your ID/passport and ticket and send your luggage through an X-ray scanner just to get into the station. You’ll get a scan and pat down as well. In some stations and during certain times of the year, you’ll also need a second X-ray and inspection.

Just as there are extreme disparities between the types of trains, once inside you’ll also see that there are extreme differences between the more rural and older train stations and the newer ones. Typically the train station will match the type of train you’re taking. The newer ones tend to be wide-open spaces with quirky architectural elements, host lots of shops and restaurants, and have lots of seating. The older ones tend to be a bit dingier and often lack the amenities the newer ones have. In these ones, you’re more likely to see lots of folks sitting and sleeping on the ground while waiting for their trains. You’re more likely to experience the newer stations in large cities on the eastern seaboard of China and the older ones in more rural areas like Guizhou province.

Got any other questions about China’s trains? Ask me in the comments! 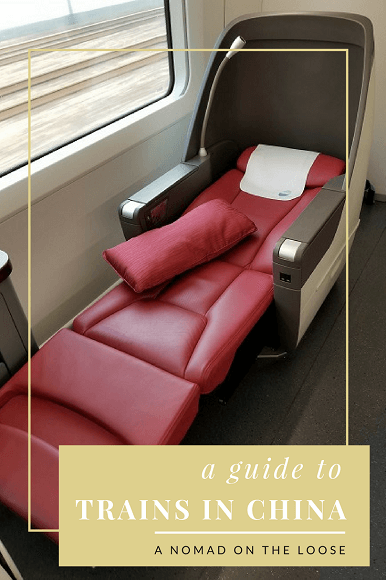 9 thoughts on “A Guide to Trains in China, from the Old-School to the High-Speed”