Any female who has traveled, especially solo, no doubt has stories of experiencing sexual harassment while traveling. It wasn’t until last November though, after years of frequent travel, that an incident made me both pissed and wary enough to change my travel plans.

Go out with friends, and some guy will think he can put his hands on you.

Get on a long-distance bus and have to be stuck for hours as he leers at you while licking his lips.

Walk down the street in a new city and get catcalled and propositioned.

Enjoy a festival and get your ass grabbed. In broad daylight.

Ask a question to learn about the place you’re visiting, and get stalked.

The #metoo movement went viral during my funemployment trip through Asia. I, like many others, instantly felt it to our core. We could immediately recall incidents of sexual harassment and/or assault throughout our lives, feel the disgust and anger rising up in us.

Soon after the initial wave, stories of sexual harassment while traveling also arose across my travel communities.

As a traveler, whether solo or not, I’ve always been generally quite cautious. And I’ve typically felt safe in most places I’ve traveled to, even in places like Morocco, one of the countries oft-listed as unsafe for female travelers. The few times I have really not felt safe while traveling have been out of caution for aggressive robbery or because I was wary about transportation safety. Not because of sexual harassment or assault.

But that’s not to say it never happens.

In the past, I’d mostly trained myself to ignore and brush it off, strike back once in a while. But the #metoo movement has empowered me to more forcefully say, no, that wasn’t simply a joke, an overreach, just being friendly. To call out those whose actions and words are not acceptable more often, to denounce their behavior even if it wasn’t physical.

I won’t lie. I landed in Nepal without knowing all that much about the country and its history or culture. I did know that it wasn’t one of those countries frequently deemed as dangerous for solo female travelers.

On my second day in Kathmandu, I went to the city’s famous Durbar Square. Extensively devastated by the April 2015 earthquake, much of Durbar Square was still under construction when I visited in late November 2017.

I was approximately an hour into exploring various parts of Durbar Square by myself when I entered Hanuman Dhoka, the royal palace.

There was so much construction going on, however, that I didn’t actually know that I was in the royal palace until after I’d left. Realizing that I’d already been in the complex, I went back to it to try to get a closer look.

Unlike other parts of Durbar Square, there is ticket enforcement at Hanuman Dhoka. I approached the guard who had previously checked my ticket because I figured he’d remember that I was there 15 minutes before.

Because there is close to no signage during the reconstruction, I still had plenty of questions when I was finished with my second visit of the palace. So I asked the guards a few questions.

The one who had checked my ticket spoke the best English, so he ended up answering most of my questions. He was friendly, and I’m always eager to chat with locals to learn more about their lives, so I continued to speak with him for a while.

Soon, however, the interaction started turning a bit too personal for me.

He asked about where I lived and with whom. [Okay, I asked him some things about Nepal, so maybe he’s curious about life in the U.S.]

He wanted a selfie with me. [Okay, so he likes to take selfies with visitors, as he showed me in his phone’s gallery.]

He asked if I was married. [Um, maybe most women my age in Nepal are already married.]

Finding out that I wasn’t married but had a boyfriend, he asked when I was going to marry my boyfriend. [Well, that’s awfully inquisitive of a stranger.]

Doing a 180, he then asks when I was going to break up with my boyfriend. [Wait, what?]

He asks me to add him on Facebook. [Uh…]

Then he basically continues to repeat this request and motion at my phone while continuously not letting me leave despite my having said multiple times that I needed to be on my way. [Starting to feel a bit wary.]

Finally, I add him with Restricted access, and eventually get myself untangled from the conversation so I could go. I left a little unsettled, but I figured that was that as long as I didn’t come near Durbar Square again.

Little did I know, that was just the beginning.

An hour or so later, I received a Facebook message from him saying he saw me on my way to Patan, a neighboring city. I figured he was joking or mistaken, only to be sent a photo of me walking from Kathmandu to Patan.

The next day, he calls me multiple times via Facebook messenger. When I don’t answer, he asks where I am and proceeds to send me dozens of photos of himself and his hometown.

He continues to call me on Facebook Messenger and ask for my location over the next few days, and I continue to deflect, saying my Nepalese SIM card was low on data or that I ran out of battery. I also receive many messages and images from him professing his love for me.

Obviously, I wanted to tell him off and block him as soon as that first photo proof of him stalking me came up. Ultimately though, as too many women (and men) know, you can’t always just confront a sexual harasser. He wasn’t just some rent-a-cop guard — he was an armed member of the Nepalese Army who obviously had information and access to track my movements.

So it wasn’t until I was safely out of Nepal that I finally sent him a message letting him know his behavior was completely unacceptable and then blocked and deleted him.

Dealing with sexual harassment while traveling

The day after the previous situation started, there was another incident near Swayambhunath Stupa (Monkey Temple) where a group of men surrounded me and aggressively stated that they were going to take a selfie with me. Perhaps the physical threat, their closeness to me, made me act more directly this time.

These two incidents made me feel rather unsafe in Kathmandu and generally more cautious in the rest of Nepal. It made decide that I absolutely had to find a hiking partner when trekking in the Annapurna. It made me decide to stay in other parts of Nepal for as long as possible. And when I finally had to return to Kathmandu prior to flying out of the country, it made me plan out my steps and surround myself with other travelers instead of flying solo without a plan.

It also certainly made me more cautious and less open to interactions with locals as I continued onto other countries. I tried my best to keep my mind open though, and I had wonderful experiences with locals elsewhere on my travels. 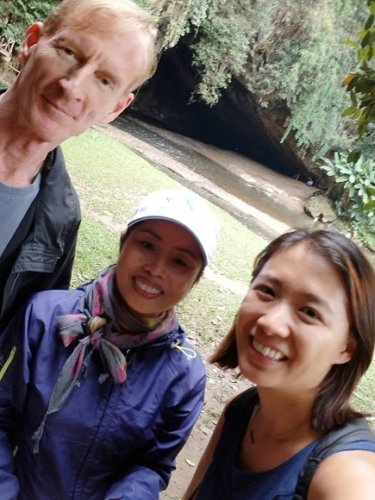 Caving in Soppong with Sunee & Mike of Chiang Mai, Thailand. 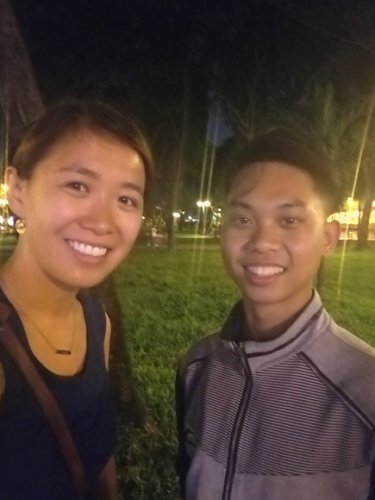 I look forward to going back to Nepal one day, to see the wildlife in Bardia National Park and to do more trekking. But I’ll probably always feel a little uneasy in Kathmandu itself.

Want to share your story of experiencing sexual harassment while traveling? Put it in the comments, or send me an email at rowena [at] anomadontheloose.com