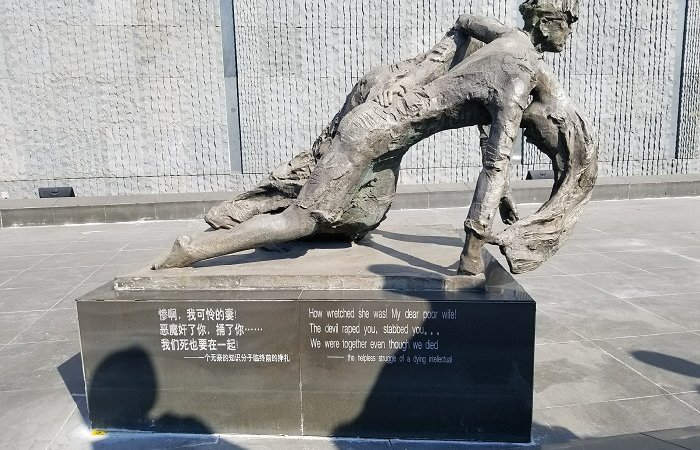 While Beijing may hold the historical treasures of China’s millennia-long history and Shanghai may be its global hub and largest city, it is Nanjing that holds the core of what China is today. Unless you or your relatives have lived in China in the past century or extensively studied the history of this period, you can’t truly understand modern China as it is without visiting Nanjing. And the number one spot to visit is the Nanjing Massacre Memorial Hall.

But if you ask anyone with knowledge of modern Chinese history to name one thing associated with Nanjing, you’ll most likely hear them say the Nanking Massacre, or Rape of Nanking.

*Trigger warning: there’s no way to adequately talk about Nanjing, the massacre, or the memorial without discussing graphic violence and rape. Where there are photos, I’ve tried to keep them to the less graphic ones. The memorial includes way more graphic photographs.

Nanjing used to be romanized as “Nanking” and “Nankin,” which is why historical references to what happened in 1937-1938 are typically written as “the Nanking Massacre” and the “Rape of Nanking.”

Technically this occurred during the Second Sino-Japanese War, though many will discuss the Rape of Nanking as an event of World War II. Like German aggression in Europe, Japanese aggression in Asia was a precursor to the historical start of the global war in 1939.

Nanjing fell to Japanese forces on December 13, 1937, and over the next six weeks, Japanese soldiers murdered 300,000 Chinese civilians and disarmed soldiers, and raped, looted, burned, and tortured with abandon. 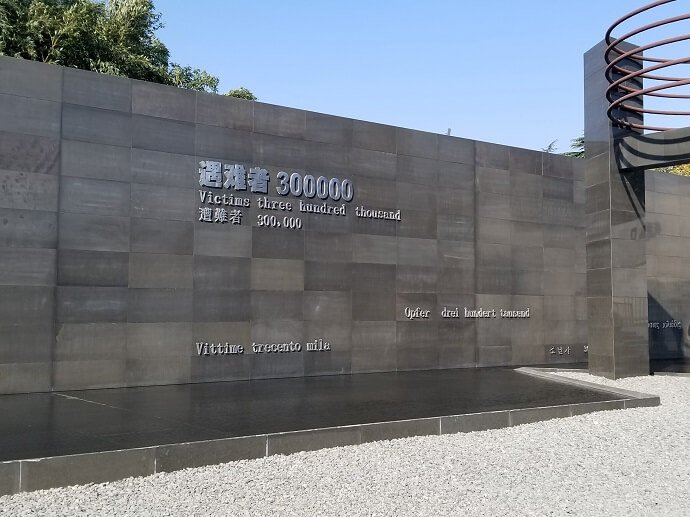 Japanese officers had killing contests to see how fast they could kill people with a sword. Japanese soldiers raped, sodomized, and mutilated women and girls; many of the victims were gang-raped and then killed and mutilated. Pregnant women were special targets, often raped and then bayoneted to cut the fetuses out of them; new mothers often saw their babies bayoneted to death before being raped and killed themselves. Approximately 20,000 children and adults were raped during this time. POWs were summarily executed outside the parameters of international law and agreements. 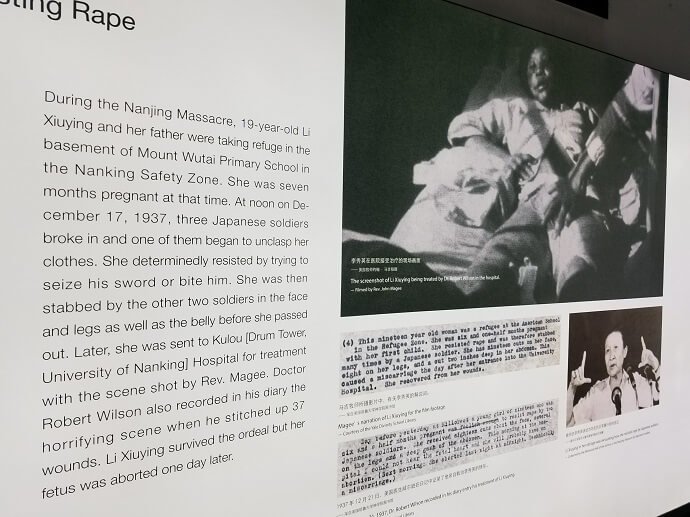 Opened in 1985, the museum is built near a site called the “pit of ten thousand corpses.” Historians say approximately 12,000 bodies were dumped in this pit, and one of the exhibition halls in the museum actually includes skeletal remains excavated from this pit.

The memorial is free to enter and starts with outdoor installations depicting the tragedies and atrocities of the Nanjing Massacre through sculptures and poems. Once inside, the museum does a good job of setting the events in historical context and showing what was occurring on the Western front as well as elsewhere in Asia. But as you get deeper into the museum, so also you get deeper into the atrocities committed by the Japanese during the Rape of Nanking and deeper into the evil potential of humanity.

It’s difficult not to swallow hard and shed some tears as you read about what happened. Many of the photos, videos, and testimonies are from survivors as well as Westerners in Nanjing who stayed behind to protect Chinese civilians as part of the Nanking Safety Zone. (Ironically, the head of this committee, John Rabe, was a staunch Nazi, and even he appealed to the Japanese government to stop their army’s behavior. When he was denounced as a Nazi after the war and fell into extreme poverty, the residents of Nanjing raised money and sent food to help feed his family as gratitude for his help during the massacre.) 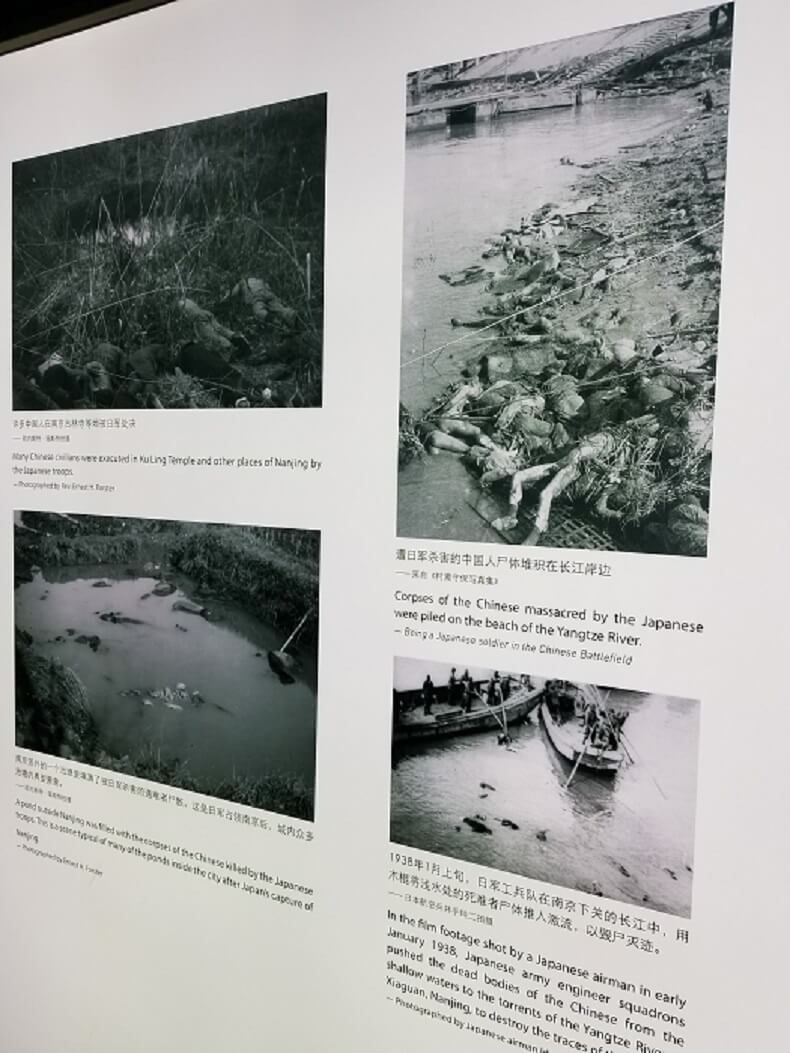 The museum also includes a section on Chinese-Japanese reconciliation, focused on moving forward and finding peace. It includes statements from the few Japanese soldiers who were at the massacre and who have since asked for forgiveness and worked toward reconciliation.

It is said today that few people who live in Nanjing are truly from Nanjing because so many of the city’s residents died in the massacre and the city was so destroyed and haunted that those who survived left. What has stayed, however, is a sense of sorrow and anger that has not dissipated.

To know what happened during the Nanking Massacre is to understand the extent of Japanese atrocities during their years of aggression before and during World War II. (One of the other extremes is Unit 731, the human experiments lab where the Japanese conducted biological and chemical warfare experiments on Chinese people.) It is a history that most of us who grow up in the West never learn in school (most of us only hear of Pearl Harbor and the Bataan Death March).

But that is just one part of the story. The reason the Rape of Nanking continues to play a huge role in modern China is that there are still prominent Japanese historians and politicians who deny it happened or actively try to minimize the scope. This and the Japanese refusal to admit other warfare atrocities has led to tense Sino-Japanese relations ever since. This friction extends to other Asian countries where the Japanese committed atrocities as well, such as South Korea and the Philippines. Japan’s current prime minister, Shinzo Abe, has visited the shrines of Japan war criminals repeatedly. A right-wing nationalist, Abe holds revisionist views of Japanese history and has repeatedly rejected or downplayed the fact that the Japanese government coerced hundreds of thousands of women and girls throughout Asia into sexual slavery as so-called “comfort women.” And in our global world, such tensions can impact more than just the countries involved, and it can impact decisions other than political ones.

To visit the Nanjing Massacre Memorial Hall is a draining experience, but it is one worth your time. Just prepare yourself for the experience. It’s okay to stop and take a break if you need to. The adjacent Victory of Anti-Japanese Memorial is also worth a visit as it continues the story after the massacre. 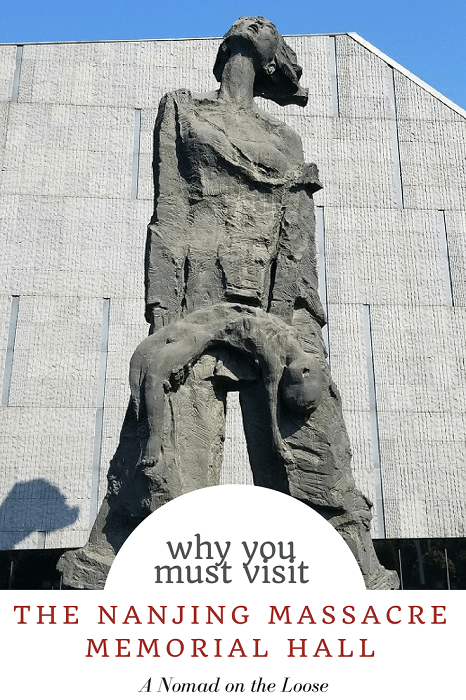